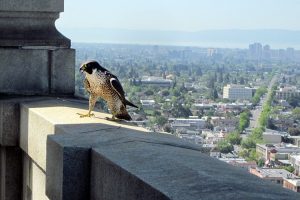 As Peregrine Falcons have recovered from endangered status in the 1990s-2000s, they have often been found nesting on bridges and skyscrapers. For the last two nesting seasons, a Peregrine Falcon pair has taken up residence on the Campanile on the UC Berkeley campus, fledging two chicks in 2017, and three in 2018. A team of citizen scientists led by UC Berkeley’s Museum of Vertebrate Zoology (MVZ) in cooperation with the East Bay Regional Park District and the Golden Gate Raptor Observatory, has monitored the Peregrines, enhancing their nest-site, watching for threats, and serving as an information source for captivated CAL falcon-spotters. In 2019, the Cal Peregrine Team is working on getting a web-cam erected on the tower to deepen our knowledge of these urban Peregrines, and to widen interest in these charismatic falcons via the web.

Beyond their sheer magnetism — the athletic hunting flights of the adults and the clumsy antics of the fledglings – the Peregrines are a profound reminder of the ornithologists of a generation ago who walked a tight-rope between science and conservation activism to bring this species back from the edge of extinction.  One of their critical conservation tools? The well-kept and meticulously-labelled egg collections of natural history museums, including our own Museum of Vertebrate Zoology.

Director of the Golden Gate Raptor Observatory (ggro.org) since its founding in the mid-1980s, Allen Fish earned his bachelor’s degree at UC Davis, then returned to teach Raptor Biology there in the 2000s. He was honored with the Maurice Broun Award for achievements in raptor biology in 2003, and the Bay Nature Environmental Educator Award in 2015. A fourth-generation Berkeleyan with deep CAL roots, Fish lives near campus with his wife Allison Pennell, their two kids and a coonhound.