If you live in San Francisco, please vote YES on Proposition H and NO on Proposition I this November to preserve Golden Gate Park and our voice in park decisions.

Here’s a summary of both measures, and why Golden Gate Audubon supports Prop H and opposes Prop I:

Proposition H would require that the Beach Chalet soccer fields in western Golden Gate Park be kept as grass, with no nighttime stadium lighting. 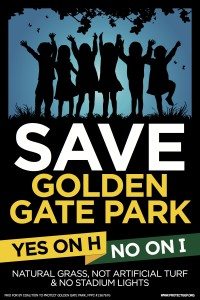 For over five years, GGAS has opposed plans by the City Fields Foundation and the city to replace the grass soccer fields in western Golden Gate Park with artificial turf.

While no one would claim that grass soccer fields are pristine habitat, the seeds, insects, and small mammals associated with grass fields provide sustenance for over 70 species of birds such as Dark-eyed Juncos, Black Phoebes, Red-shouldered Hawks, and migrants like Western Tanagers. Artificial turf would turn this area into a “dead zone” for wildlife.

In addition, the city plans to install powerful stadium lighting that would be dangerously near migration paths along the coast. These night lights would make it no longer safe to nest in surrounding trees and during migration could draw birds off track, disorient them, and leave them vulnerable to collisions or predators.

The creation of a major soccer complex in this area would violate the Master Plan for Golden Gate Park, which calls for the western part of the park to retain a more “natural” character.

We believe the city can improve soccer opportunities by taking better care of the grass fields, and by building additional fields at other sites that are not designated as natural areas.

Proposition I: Renovation of Playgrounds, Walking Trails and Athletic Fields

Proposition I would allow any project to proceed once an Environmental Impact Report (if needed) was completed, if the San Francisco Recreation and Parks Department forecasts that the project would double usage within a calendar year.

It also specifically counters Proposition H so that if they both win but Prop I receives more votes, then Proposition H is invalidated. For this reason, Proposition I is being presented by some as the opposite of Proposition H.

However, its impact is much broader than this one issue. It allows SFRPD to proceed with any project that they estimate will double usage, independent of the community’s desires or priorities. It removes nearly all means of appeal or legal review.

Why GGAS opposes Proposition I:

1) This is essentially a carte blanche for SFRPD to move forward with any project it wants, regardless of community input. Once it is part of the Parks Code, it will stay there even as administrations change.

2) It makes “usage” within one calendar year the primary basis for assessing and approving a project. It doesn’t consider other issues such as wildlife or environmental repercussions, nor does it look beyond a single calendar year.

3) The language for Prop I states that it shall be “liberally construed.” This could open the door to commercialization of city parks, if the city contends that commercial uses will double the use of a park.

Whether you support or oppose the Proposition H soccer fields, we urge you to vote NO on Proposition I. Prop I goes far beyond the soccer field issue and could affect parks and wildlife for decades in the future. If it passes, we lose our voice about what happens in our parks.

Want to get involved?

The Yes-on-H, No-on-I coalition has signs you can place in your window or on your lawn. The coalition also needs people to hand out flyers at community events and ask neighborhood merchants to put signs in their windows.

The Sierra Club will be doing phone banking during the four days before the election and could use more volunteers.

The coalition is also raising money to do a citywide mailing: You can donate to the campaign at protectggp.wordpress.com.

Read one of our past blog posts about wildlife and the Beach Chalet soccer field.

Did you know that top U.S. women’s soccer players including Abby Wambach are suing international soccer officials for forcing them to play on artificial turf in the next Women’s World Cup? “No chance men would ever play a World Cup on turf,” one player said. “The women are being treated as guinea pigs.”

Read the text of Proposition H.

Read the text of Proposition I.

Birding at the University of California Botanical Garden

Help Protect Our Birds in the Altamont Pass