Lake Merritt, the heart of Oakland, has long beckoned people to peel away from the pulses of the city and just watch the birds. Golden Gate Audubon Society was fortunate to spend the morning at the lake recently with some remarkable people who are new arrivals to the Bay Area.

We connected with them through 1951 Coffee Company, a local non-profit that provides job training and employment at coffee shops to refugees, asylum seekers, and special immigrant visa holders. The purpose goes beyond jobs, though—to building a community where refugees can be supported, cherished, and welcomed.

For Audubon members who dream about birds all day, an intuitive form of welcoming is to share the unique places and wildlife that make the Bay Area feel like home. How could GGAS share a relevant experience? I contacted 1951 to ask, and connected with Cynthia Zhou, a staff member who coincidentally had thought a lot about nature and the refugee community. She agreed that birds make good ambassadors.

We teamed up and went on a bird walk on a Saturday morning in late September. 1951’s training cafe is a few blocks south of Lake Merritt, making the lake a natural destination to explore.

From Audubon I was joined by Clay Anderson (naturalist and GGAS Eco-Education staff) and Dan Roth (fellow board member). From 1951 side, we were joined by Cynthia Zhou and Hannah Carter (both in AmeriCorps positions).

And of course, the participants in the trainee program! There were a dozen current and former 1951 students. They had sought refuge from Eritrea, Nepal, Saudi Arabia, and Ethiopia. The range of time that the students had lived in the U.S. varied: Some had been here for a few years and were familiar with the Bay Area, while one student had just arrived a month ago.

They were all interested in Lake Merritt; only two of them had been around the entire lake before.

Within our two-hour adventure, we encircled both sides of Lake Merritt, ate chocolate croissants in front of a fitness boot-camp, and even went birding with a bird!

We met at the Amphitheater at the south end of the lake. It was a crisp, sunny morning.  The air held the first hint of fall.

During introductions, we shared what we like most about the outdoors. This included being near the lake, the smell of the water, and the freshness of the air. Everyone had an appreciation for nature and seemed to agree that being outdoors is a good way to find peace of mind.

Cynthia brought her pigeon Miu—an exceptionally tame bird that she adopted through Palomacy, a pigeon- and dove-rescue organization for birds that can’t live in the wild. It was a sweet connection to have a domestic bird in hand, whose inner character we could glimpse while viewing the wild birds. To ensure that she would not interact with wildlife, she was leashed as we passed her from hand to hand, and Cynthia kept a backpack that served as a crate available.

After introductions, we handed out binoculars and began. The crows and gulls overhead seemed familiar to everyone. Clay explained how to use the binoculars, and everyone was soon scanning around.

Next, we walked over to the tidal channel. This spot has seen increased wetland habitat since it was opened in 2012, restoring a connection between the lake (or rather, lagoon) and the Bay. Clay described how the re-created wetlands had brought certain birds back.

We learned a name for each bird – egret, pelican, cormorant, gull. “I have often noticed these different types of birds, but did not know any of their names,” one woman told me. But the names were a small part of what we were doing. Mostly, we tried to watch like a naturalist. How did these birds interact with their environment and how did they make a living? Who was there to fish and who was there to show off plumage?

We turned around to face a Red-shouldered Hawk just 20 feet away, clinging to the top of a conifer. This predator seemed on alert, wide-eyed, its amber and white feathers dappling in the light. Then a crow started dive-bombing the hawk!  Miu didn’t seem concerned.

Dan pointed out a White-crowned Sparrow and described how it may have just arrived. If part of a non-resident migratory population, it could be returning from Alaska after traveling thousands of miles through the cool night. 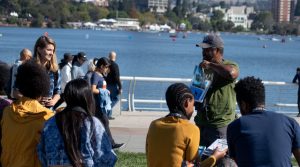 Dan and Clay kept the observations going, spotting a Black-crowned Night-Heron pacing in the shadowy limbs of a pine, while I darted around in the background gaining an appreciation for event planners. After some transportation coordination and a few minutes in the Kaiser Convention Center parking lot, we departed from the south end to the north end of Lake Merritt.

We arrived at the Rotary Nature Center, where GGAS has recently started teaching birding classes.

The Nature Center, Geodesic Dome, and Bird Islands form an epicenter of bird activity. These structures reflect decades of bird-centric planning decisions. The first bird island was built in 1923 by the rogue Mayor Davie, with considerable backlash. Paul Covel, a GGAS member who was the first naturalist hired by the City, oversaw construction of four additional islands. Covel used the Geodesic Dome as a rehabilitation center—at one point, sheltering a Sandhill Crane.

We viewed even more birds, and heard even more names. Flycatcher, grebe. Then we matched patterns to illustrations—Black Phoebe, Pied-billed Grebe.

Meanwhile, Miu remained calm. She moved from hand to hand, further relaxing with each scratch she received on her head. Her calmness extended around the group. We compared the bustle of cars and throngs of people to the pace of birds floating on the water.

When the day started heating up, we headed inside the Rotary Nature Center. The Center has been here since 1953, but just reopened this year after a few years of hiatus. The taxidermy specimens gave us close-up views of some of the birds we had peered at outside. Well… not the cougar. She attracted a lot of interest and recognition from these African and Asian refugees: This was like a lion! Upon mentioning that the cougar could sometimes be found in the distant hills, I sensed it was possible to hold a view of two landscapes in a single instant.

At the end of the trip, we all chatted a bit more outside while we waited for rides.

As trip leaders, we were greeted by curiosity, patience, and kindness. When everything is new, requiring constant adaptation, this was yet another new experience they embraced. I’d wondered if they might perceive us as dorks with binoculars, but there was no judgment—just curiosity and open-mindedness. I was grateful to this group for accepting our invitation to share one of the ways we relate to nature.

They thanked us with hugs and handshakes at the end of the walk. That was new to me—to get thanked like that after a field trip.

To our new 1951 friends: We were happy to spend a few hours together and hope to see more of you in the future!

A special thanks to Cynthia Zhou for helping to plan and carry out this event, and thanks to everyone at 1951.

Laura Cremin is a member of the Golden Gate Audubon Board of Directors and co-chair of our East Bay Conservation Committee.