I may not be the best birder since I’m not much of a morning person, but recently I woke up at an ungodly hour to drive to Fairfield for the dawn. I thought, “Who is this person who really doesn’t like to be cold, but is so captivated that she forgets she is shivering, and her hands are numb on a wind tunnel of a bridge despite a hat, gloves, and multiple layers, because she is waiting for, of all things, a baby rodent to appear?”

The dawn slowly lit up the small creek below as I searched the water because I heard there was a beaver kit, and I’m a pushover for baby animals. Suddenly, a Green Heron erupted out of the marshy edges and flew across the creek and over a nearby house. Green Herons have declined by 68% (from 1966 to 2014) and can be elusive to find as they hide in vegetation. Who would’ve thought that you could find a family of beavers in the middle of a city on a human-channeled creek surrounded by houses on both sides, and that the beavers would be able to create enough habitat to attract waterbirds like Green Herons? Happily, I got to watch both an adult beaver and a kit swim in the creek. The kit seemed annoyed by a nearby mama Mallard and her five ducklings and slapped the water with a cute tiny whack.

A love of nature led to a love of birding, which led me to notice a reference to the California Beaver Summit in a Golden Gate Audubon email last year. Worrying about climate change, I was intrigued by their hook—what if one of the solutions to problems like drought and wildfires was simple, affordable, and nature-based? What if it involved an unlikely, plump rodent with buck teeth and a flat tail?

The two-day summit of virtual presentations on this keystone species included Dr. Emily Fairfax, who researches how beavers can engineer drought and fire-resistant landscapes, and Dr. Michael Pollack who studies how beavers create slow water habitat that is critical for salmon growth and survival. I was on my way to becoming a beaver believer.

Before the California Beaver Summit, I had never seen a wild beaver, so I got excited when they told me there were some in Fairfield and on the Napa River. The Fairfield beavers had a Facebook group with a map, making it easy to find them. I visited these crepuscular critters five times in the last year, both at dusk and dawn. Like any curious birder, I looked to see what birds would be found along their urban creeks.  So far, I’ve seen a total of 32 different species representing 21 different bird families with at least 455 individual birds counted on an approximately one-mile section of Laurel Creek.

Why This Birder Gives A Dam About Beavers

USFS Wildlife Biologist Karen Pope talked at the California Beaver Summit about how beaver dams doubled the probability of willow flycatchers and doubled the density of song sparrows compared to areas without beavers. So, I wanted to learn how else beavers might benefit birds.

Beavers affect biodiversity because their activity slows water, stops soil loss, creates pools and canals, and is associated with increased plants and beetles. Beavers transform stream habitats from narrow strips of vegetation to wide dense wetlands with lots of plants. Their dams and burrows can create microhabitats for amphibians like red-legged frogs and northwestern salamanders. Muskrats, water voles, minks, and otters benefit from the abundant prey and den sites in beaver ponds. Some restoration projects for endangered salmon and trout have built structures called beaver dam analogs (BDAs) which slow streams and imitate beaver ponds with slow cold pools for the baby fish, resulting in huge increases in juvenile fish and survival rates.

A review of the impact of beavers in their wetland habitat noted that insects abound near beaver ponds, providing food for songbirds. Shallow water along pond edges contains plant particles, seeds, and invertebrates for ducks. Swans and geese have built nests on the tops of beaver dams and lodges, for protection against predators. As beaver dams flood an area, drowned trees attract woodpeckers and other cavity-nesting birds. The dead trees and snags are also used by raptors. 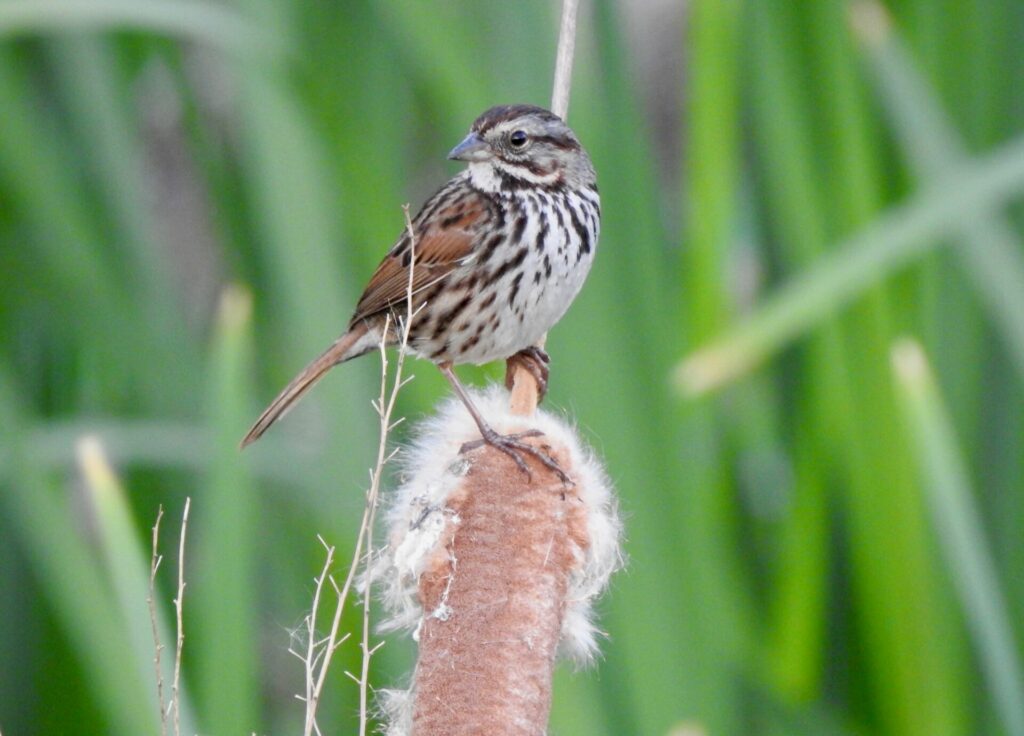 The diversity of bird species near a beaver pond has been found to be 50% to three times greater than that near an unmodified waterway. A study in Wyoming and one in the Adirondack Forest in New York found more bird species at beaver sites due to wider riparian zones and tree diversity. Another study in Wyoming found 75% more waterfowl on streams with beavers than those without.

Streams with beavers are associated with willow, vital for the federally endangered southwestern Willow Flycatcher (Empidonax traillii extimus).  The Sierra population of Willow Flycatchers occurs in small numbers and within less than 100 meadows in the Sierra Nevada and Southern Cascades. More Willow Flycatcher habitat could be restored by encouraging beavers and their activities.

But there’s more than just the wetlands. Cornell Lab of Ornithology’s 2019 study noted that of the almost 3 billion birds lost in the last 50 years, the grasslands areas posted the biggest losses, with over 700 million individuals lost across 31 species since 1970 (a more than 50 percent decline). A study on the conservation of grassland birds in North America said: “… elimination of beavers resulted in the loss of floodplain meadows that supported grassland birds…The systematic destruction of keystone species such as beavers and prairie-dogs is one of the greatest and least-appreciated reasons for the loss of biological diversity in grassland systems.” Also, when beaver ponds are abandoned and taken over by grassy areas and shrubs, resulting in the creation of beaver meadows, these areas had the highest levels of bird biodiversity when compared to other adjacent riparian areas.

Another interesting discussion in Ben Goldfarb’s compelling book, “Eager: The Surprising Secret Life of Beavers and Why They Matter” and this webinar is how the declining Greater Sage-Grouse would benefit from beaver-created wetlands in their increasingly fragmented arid sagebrush habitat.

On undammed streams, storms and floods propel water racing down a single thread channel, causing erosion. The streams can become more and more incised, and much water is lost to the ocean. Since the large peak flow is in the spring after the snowmelt, there isn’t much water left in the streams for nearby plants in the summer.

But things are different on a stream with the North American beaver (Castor canadensis). These rotund rodents are clumsy on land but are agile swimmers with webbed back feet. Nature’s engineers build dams and lodges made out of sticks, logs, and mud to create a big watery pool where they can be safe from predators. They build canals into the sides of streams to reach more trees via water. Their iron-strengthened orange teeth never stop growing, so they can cut down more trees. When floodwaters race downstream, their dams slow water, spread it out, and store it into the soil so it takes more time to release. During the summer drought, there is enough water stored in the soil and water table to keep plants green. The beaver-dammed stream has flattened the bell curve of streamflow and releases the water much slower and later in the year, so it’s available during the summer.

Beaver activity increases the riparian areas around streams and their plants thrive and don’t dry up in the summer, so they don’t become fuel for wildfires. Beavers create wetlands that become fire breaks and refugia during wildfires, protecting plants and other animals.  Beaver dam areas have three times more protection from wildfires than areas without beavers.

The California Native Plant Society reports only 5 to 10 percent of California’s riparian habitat remains today. What would happen if we encouraged beavers to repair and restore some of that habitat?

The story of the Fairfield beavers on Laurel Creek involves the city of Fairfield, which can get a permit to kill beavers, and has removed their dams in the past due to their worries about flooding. Yet other solutions exist, like beaver flow devices and cost-effective pond levelers.  Meanwhile, the city of Napa recently celebrated these peaceful vegetarians’ biodiversity effects with interpretative signs.

Currently, the California Department of Fish and Wildlife allows property owners who consider beaver as pests or nuisance to remove their dams and kill them. However, Governor Gavin Newsom just proposed a new “Beaver Restoration” program to be run by CDFW, which would promote their restoration and conservation.  This budget proposal, which needs to be approved by the Legislature states: “It might be odd, but beavers are an untapped, creative climate solving hero that helps prevent the loss of biodiversity facing California. In the intermountain West, wetlands, though they are present on just 2 percent of total land area, support 80 percent of biodiversity.”

What if like our bodies’ miraculous ability to heal, we can trust nature’s ability to heal and repair the land? As someone who doesn’t want to choke on the inevitable wildfire smoke coming our way, what if we trusted in nature’s engineers to help restore streams and build resilient habitats?

When threatened, beavers use their big, flat tails to slap the water with a loud startling whack. What if instead of seeing beavers as pests, we heed their “whack-up” call? Beavers, birds, and our lungs will thank us.

Want to learn more about how beavers matter to birds and other wildlife and how cities can live alongside them? Attend the 13th annual Beaver Festival sponsored by Worth a Dam, on Saturday, June 25, 2022, at Susana Park in Martinez, from 11 am – 4 pm.

Elizabeth Winstead recently became a certified California Naturalist. She occasionally posts bird and nature photos on Instagram as @violaceous_euphonia
PrevPreviousCome for the Birds, Stay for the Chocolate
NextHow Many Birds Can Be Found in the Bay Area in One Day?Next
Facebook Instagram Youtube Twitter

From the Trees to the Streets to Safety

On the Greater Sage-Grouse Lek