Poems about ravens and crows

When eighty California poets come together to create an anthology about crows and ravens, you know these corvids have a strong grip on the human imagination.

The anthology A Bird Black as the Sun: California Poets on Crows & Ravens was produced by two Santa Barbara poets, Enid Osborn and Cynthia Anderson, and published earlier this year by Green Poet Press.

The Press is affiliated with Green Poet Project, founded by Osborn in 1999 to promote poetry events and publications in the Santa Barbara area.

The title is taken from Gary Snyder’s Myths and Texts: 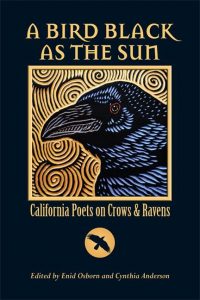 This wonderful collection is divided into ten sections beginning with Awakener and ending with Night-Bringer.  The titles evoke certain aspects of “crowness” such as “Enigma,” “Muse,” “Omen,” “Joker” and “Messenger.”

I had not intended to read every poem, but ended up doing so.  Not every poem resonated with my corvid sensibilities, but most did.

Jim Natal’s poem “Early Morning Crow,” states that “Crows have no shame.  They caw at 6 A.M., expect a response from windows reflecting overcast skies….” and then ends with “a solitary crow that croaks:  Is anybody there?  Is anybody there?  Then flies away before you can form a suitable answer.”

Osborn, one of the co-editors of the collection, says that “what sets crows and ravens apart from other birds is their ability to individuate and surprise.”  She adds that “The same is true of the poets who fill these pages.”

Like all good poems, this collection inspires you to dig deep for your own crow thoughts.  For instance, deborah major writes in her “San Francisco Crows:”

When I was a child
There were no crows
in San Francisco
no wild crows
sleek, black and full
of harsh, assaulting song.

Those lines prompted me to remember that when I heard the raucous, impertinent Common Raven’s call for the first time a few years ago, I thought it gave a nice, unexpected wildness to the Berkeley hill where I live.  Then, as their numbers increased and they took up surveillance positions on the tops of the tallest conifers, I worried whether they were looking for songbird nests to raid.  And as ravens and crows became more abundant everywhere, I wondered why.

I especially appreciated the poems in the section titled “Joker.” W.K. Gourley speaks through a crow in his poem “Crow Advises Claude, the Bird Hunter,” saying:

Claude, you have a faulty view of my kin,
Our Corvus family is not responsible
For foot-tracks around your eyes
Or measuring a straight flying distance.
We would not stoop to the metaphor
abasement, such as ‘eating human.’

“When the crows come
black against the darkening sky
their wings obscure the sun
and small sounds drown
in their strident caws.
They storm the walnut tree
snatch the green fruit
drop it from great heights
retrieve the cracked kernels.
Again and again they dive
From tree to ground
feathers gleaming
where stray sunrays touch.
And when the mountains turn blue
with the haze of evening
the crows lift off in ebony formation
head toward some secret roost
where they blend into the night.

You can read more about A Bird Black as the Sun at http://www.greenpoetpress.com/index.html. You can buy copies of the anthology online from Barnes & Noble, Amazon, or ask your local independent bookstore to order a copy for you.

Oakland CBC: From Fog to UFO’s