My name is Teresa and I am the Banding Manager at Golden Gate Raptor Observatory (GGRO), a program of the Golden Gate National Parks Conservancy. I started working with raptors 25 years ago by presenting raptors for public outreach programs, and I began banding raptors in 2008 as an intern for Golden Gate Raptor Observatory. I continued to band and count migrating raptors at different migrations stations throughout the west and in Veracruz, Mexico. In 2016, I received my Master’s degree studying America Kestrel body size change as it relates to population decline, and then returned to GGRO as the Banding Manager. I have been involved with banding the osprey nestlings at SF Bay Osprey’s Whirley Crane site since banding began in 2017. I know there have been a few questions out there about banding, and thought I would share a little bit about the why we band raptors and the banding process.

Each year, millions of birds are banded throughout North America and the world. The information from banding birds is used to monitor the status and trends of resident and migratory bird populations. To band birds, you must have the appropriate state and federal permits, and years of banding and handling experience.

You might be wondering – why do we use both a color band and a metal band on the osprey nestlings? Why not just a color band?

Color bands, also known as auxiliary markers, are usually made from plastic or metal and placed on the leg opposite to the one that receives a metal band. Researchers must coordinate with California Department of Fish and Wildlife, as well as other raptor researchers in California to determine a researcher specific color and alphanumeric code. The goal is to avoid duplicating work by colleagues and to reduce the disturbance to the raptor. However, sometimes some colors for the bands are used in two different regions in the United States, and that is why it is important to get the banding code on the color band.

The metal bands we use are issued by the Bird Banding Laboratory (BBL), which is part of the US Geological Survey (USGS). BBL is a scientific government agency, established in 1920, that supports the collection, archiving, management, and distribution of information from banded birds in North America. BBL manages more than seventy-seven million archived banding records and more than five million encounter records. Each metal band receives a unique eight or nine-digit code—like a social security number, but for a bird. When it comes down to it, the metal bands issued by BBL are more important because they help us track birds banded all over North America through time, using a system common to ALL North American researchers, with the data collected and stored in a central location. The metal bands are more durable, whereas a color band can degrade over time.

Any time you see a bird with a band, and can read the band number – it is important to report this information to BBL at www.reportband.gov. Once you report the band, it goes into a data base where the reporter will receive a “Certificate of Appreciation” from BBL. This band recovery information gets passed to the bander and is imported in their database. Each year, GGRO bands on average 1,400 raptors, and receives a lot of band recovery data. GGRO has very dedicated volunteers that go through each of these records and contacts the finder to get more details on every recovery. Sometimes this process can take months due to the multiple communication points, and if the band recovery information that is submitted is incomplete, this process will take longer. The osprey are currently banded under GGRO’s state and federal permits, so any osprey band recovery data is within the same file as the other raptor recoveries we receive, and we go through the reports in the order they come in.

Please enjoy some more photos of the banding process: 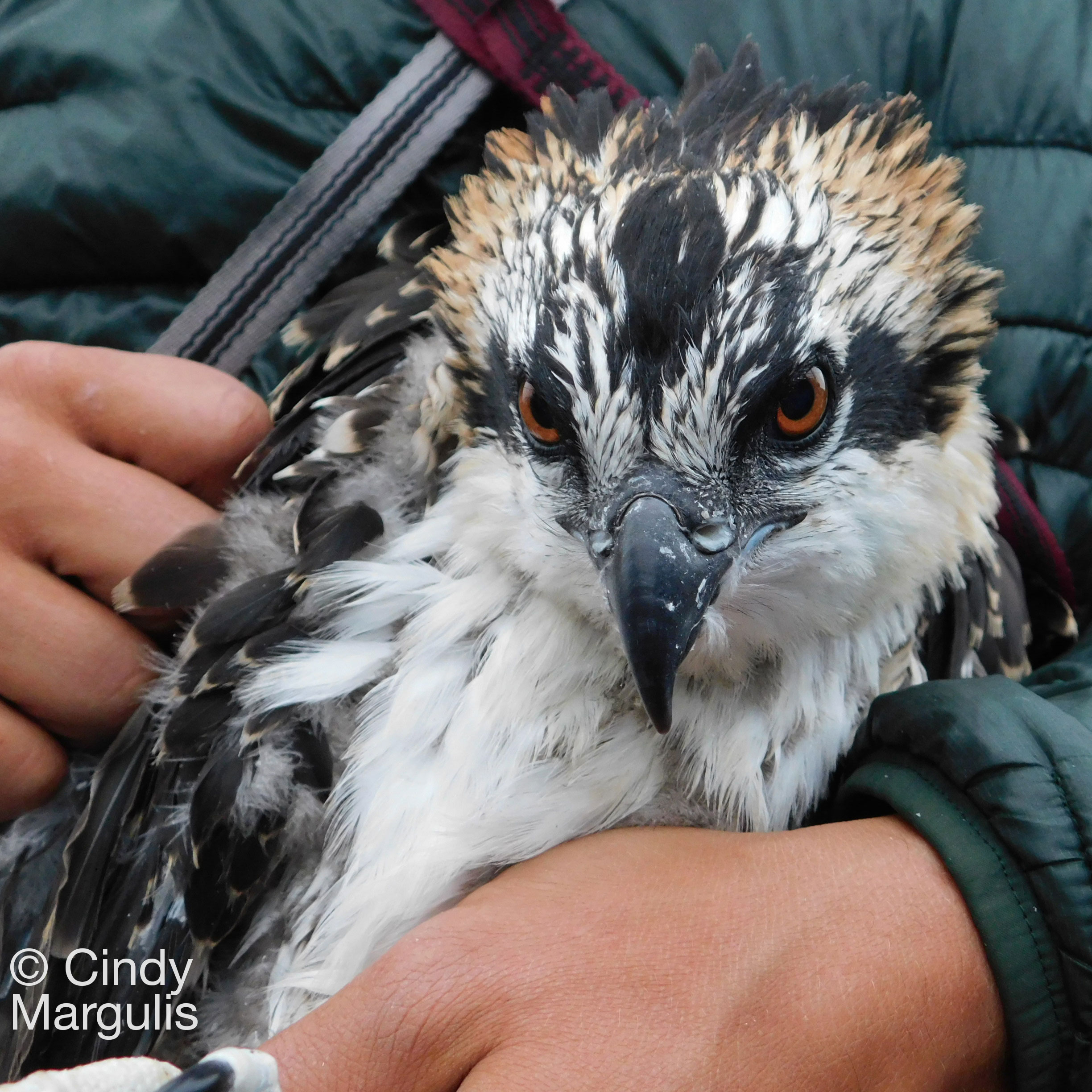 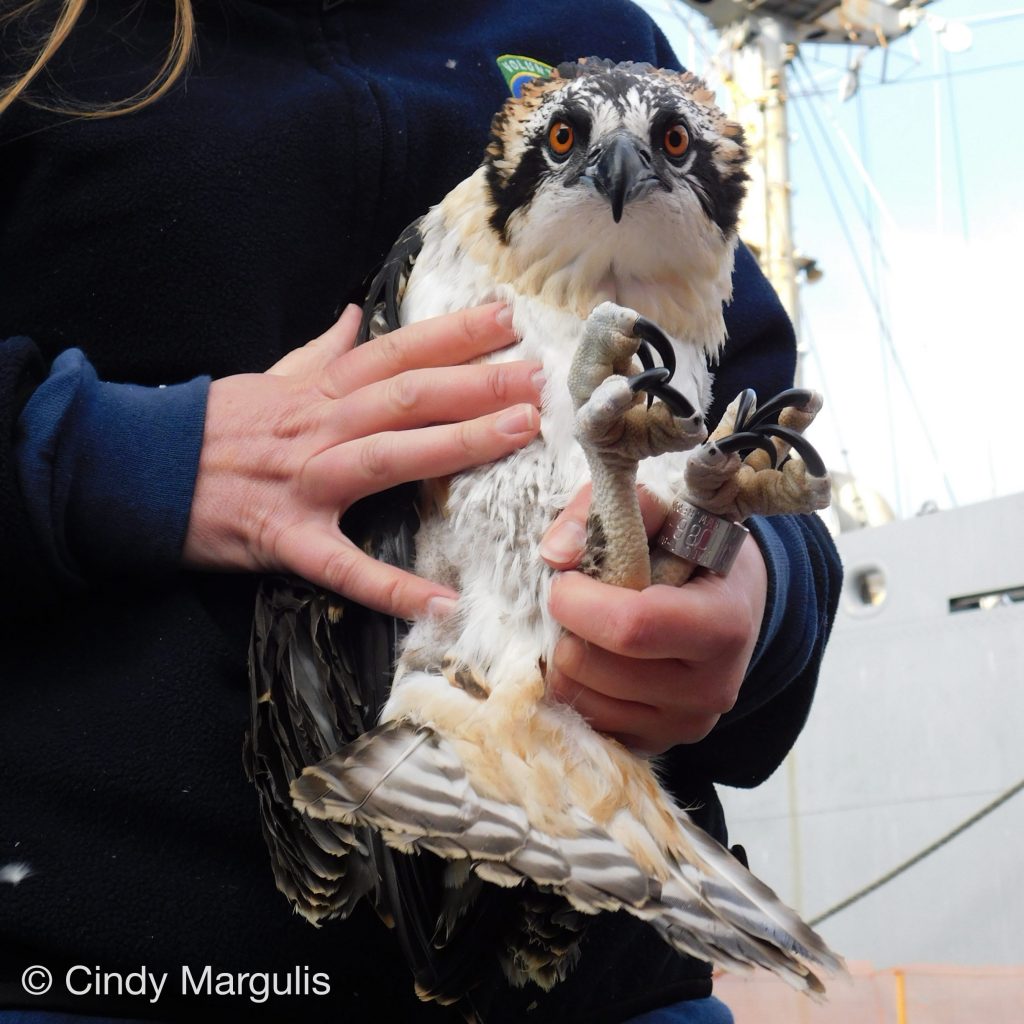 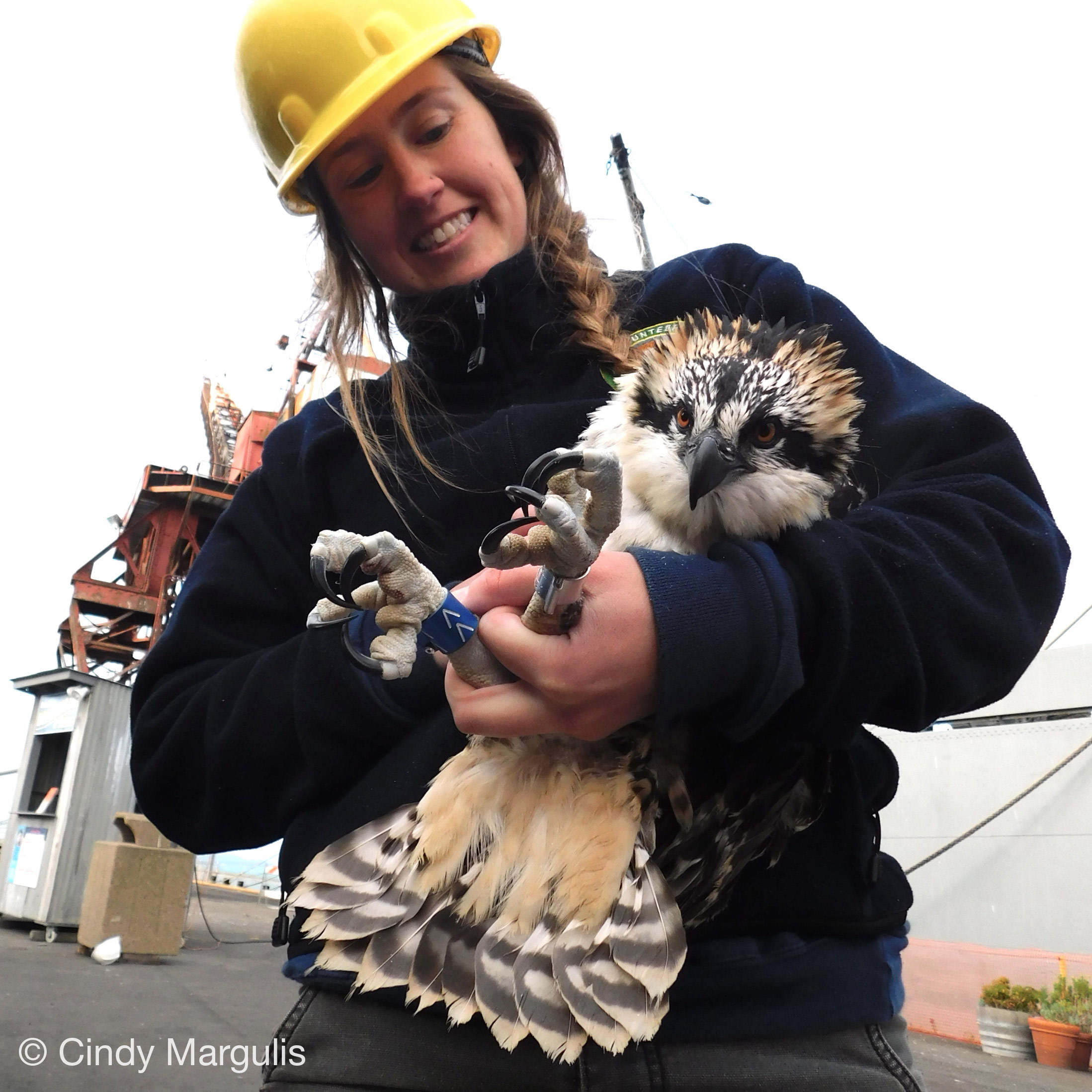 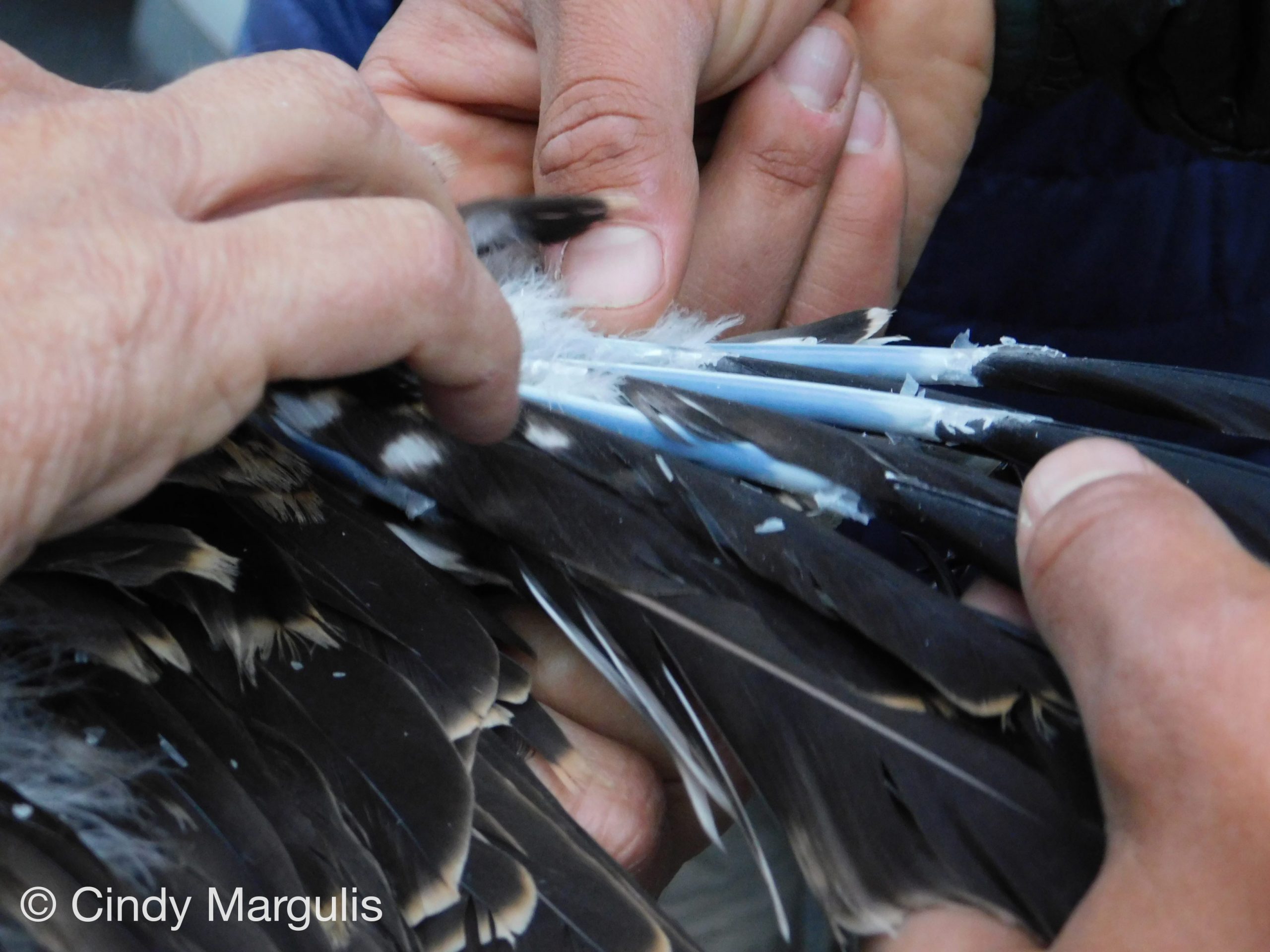 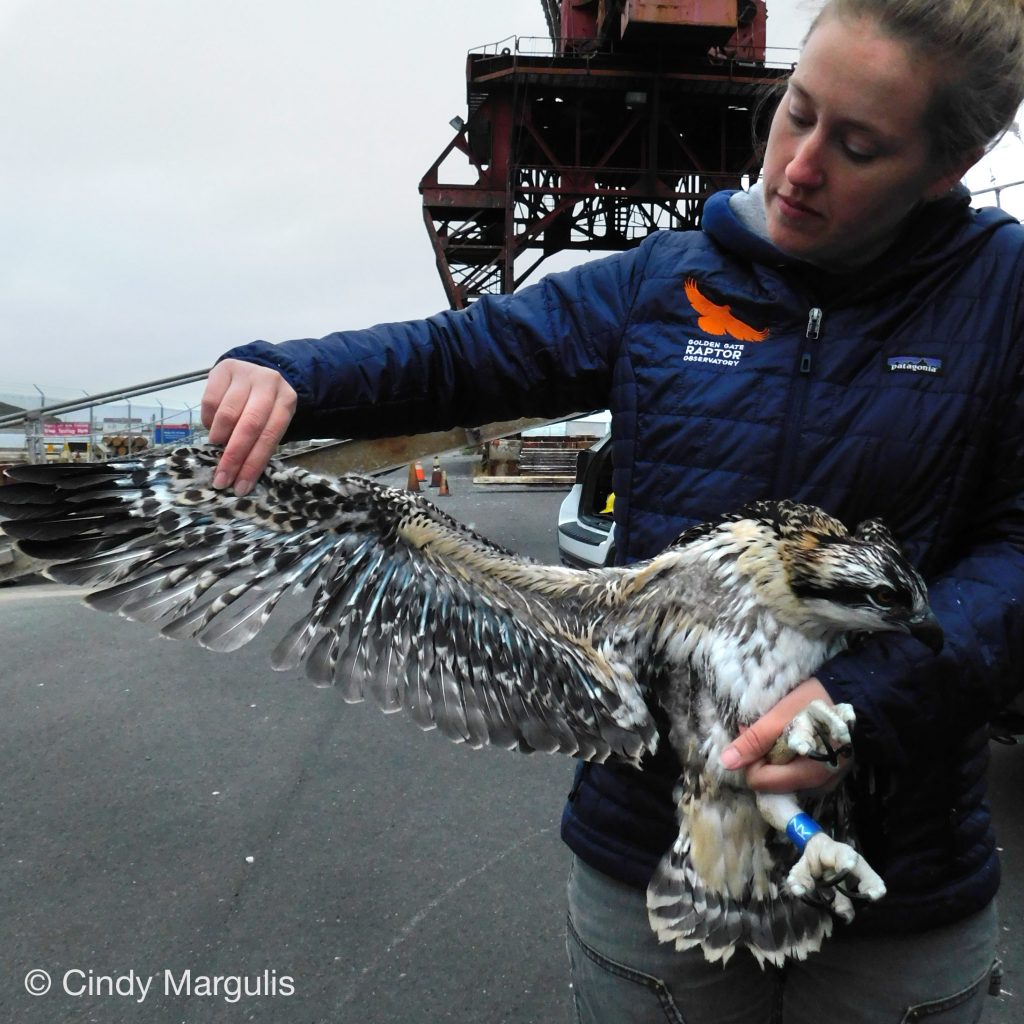 Another common question we get is why don’t we allow the public to observe the banding process in person or via the live stream? Raptor biologists are very dedicated to the raptors’ health and safety during the entire banding process. Extra people or cameras can place extra stress on the osprey nestlings as they are being banded, as well as cause stress on the osprey parents.

And surprisingly, additional people can also put added strain on the biologists while they do their job. When we are able to work calmly and efficiently, we can reduce the stress on the nestlings, and to Rosie and Richmond, by getting the young back in the nest as quickly as possible. If you’d like to catch up with Rosie and Richmond, check out the Osprey Cam livestream at sfbayospreys.org.

Teresa Ely is the Banding Manager at GRRO. If you’d like to learn more about the banding process or have any further questions about Osprey banding, please send an email to ospreysciencedata@goldengateaudubon.org. Robin Banks, Osprey Cam volunteer, helped to watermark the photos.

Oakland CBC: From Fog to UFO’s