Everyone loves a good story, especially a story with a happy ending. This story, like many good stories, includes a journey and a group of dedicated and determined children. At the heart of this story is a “cool and funky bird” and the people who worked together to help protect it. This is the story of how the Black-crowned Night-Heron became the Official Bird of Oakland.

Birds are amazing animals. Watching them fly, waddle or perch on the highest branches is nothing short of magical. Their plumage, songs and nesting habits make them fascinating subjects to observe and study. For this reason, and many more, birds are at heart of the third grade science curriculum at Park Day School, a K-8 independent school in Oakland, California.

When a mysterious goo spilled in San Francisco Bay in 2015, hundreds of birds covered with sticky gunk washed up on the east bay shoreline, including at the Martin Luther King Jr. Regional Shoreline, the same wetland where Park Day third graders were helping with bird habitat restoration. “When you see a problem, do something about it” is a common phrase that you hear throughout our classrooms, so it came as no surprise to see our third graders responding to this news with a call to action.

Whenever we are faced with the news of a problem in the community, we teach our students to first identify who the “helpers” are. In the case of the “Mystery Goo”, it was the team from International Bird Rescue, a non-profit organization devoted to the care and rehabilitation of waterbirds. After doing some research, our students were shocked when they learned how much it cost to clean, house and rehabilitate the goo-covered birds. The students decided the best way to support the helpers was to do some quick fundraising. Students sold handmade jewelry and crafts along with gently used books at an after-school sale and raised $607.00 for the organization. A few weeks later, we were on the beach with a team from International Bird Rescue for a celebratory bird release event. It was an extraordinary opportunity for the students to see such a happy ending for the rehabilitated birds. One of the most enthusiastic guests we met that day was Cindy Margulis, the executive director of Golden Gate Audubon. “Who are these kids” she asked excitedly, “and what kind of school is this?” From that point on, Cindy became a regular guest speaker in our third grade, sharing her love of birds and her advocacy work with Golden Gate Audubon.

It was during one of Cindy’s presentations in 2017 when we first learned about the the plight of the Black-crowned Night-Heron in downtown Oakland. This story had many elements of a classic tragedy: helpless babies (in this case, baby birds), big developers and alarmed citizens. The students were immediately smitten with the baby dinosaur-like young herons, and concerned about the predicament they faced.

Even though there were a lot of helpers involved in this story, including our friends at International Bird Rescue, the Oakland Zoo and Golden Gate Audubon, it was clear that the herons needed more than just rescuing. People needed to hear their story. After Cindy’s visit that day, the classroom conversation quickly turned into a brainstorm: How can we help the Black-crowned Night-Herons? If we share their story, will more people start caring about them? What would happen if the Black-crowned Night-Herons became the Official Bird of Oakland? Would that help? 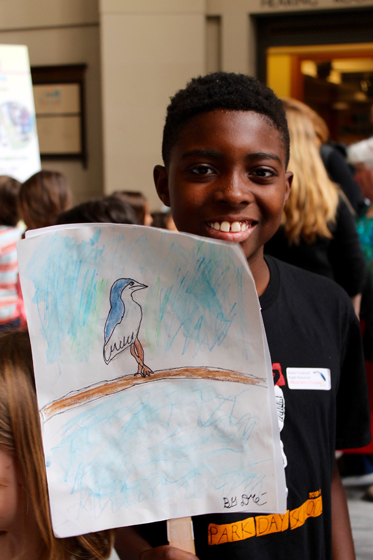 When you’re eight-years old, you can be somewhat limited in the actions you can take on your own. In the case of the Black-crowned Night-Herons, the students decided they needed to reach a grown-up, ideally someone who worked at Oakland City Hall, someone with some decision making power.  We decided to contact Dan Kalb, our District 1 Oakland City Council Representative, to see if he could help.

This marks the beginning of what became a long journey, an epic effort that started in March 2017 in a conference room with Councilmember Kalb. Imagine this: a huge, glossy table in a quiet meeting room. Seated around this table, fifteen serious third graders with notes in hand. It didn’t take long for Councilmember Kalb to realize how well prepared these students were. Everyone quickly got down to business. He listened carefully and asked tough questions. “I will have to do some research,” he explained, “to find out if other cities have birds and if so, how they chose them. This might take a long time. You are in third grade now. How will you feel if it doesn’t happen until next year? Or the year after?” The students stood firm in their commitment. We’re OK with that, they all nodded in agreement.

After our meeting that day, we were full steam ahead with our campaign. While we waited for word from city hall, students began taking action in ways both big and small. A team of students made a short video at Lake Merritt about the Black-crowned Night-Herons and shared it on our school’s Facebook page. “It’s a cool and funky bird, just like Oakland,” one third grader famously declares in the video. We created an online petition on Change.org, as well as paper petitions for families to sign on campus and other locations. The Oakland Zoo’s Teen Guides were inspired by our even younger kids’ effort, so they began tabling with a copy of our petition and created delightful Black-crowned Night-Heron art projects to engage the topic with zoo visitors on weekends.

For the next two years, each third grade cohort that followed kept the campaign alive. They never gave up. When we learned that one of the new designs for Oakland Public Library’s library card featured a Black-crowned Night-Heron, we invited the artist to our school. Collage artist Lea Zalinskis came and taught our third graders how to make heron puppets (adults on one side, babies on the other!).

That fall, we ran a campaign and puppet making booth at the East Bay Mini Maker Faire. A few months ago, the current third graders hosted a School-Made Arcade in Temescal Alley that featured student-designed, arcade-style games made from cardboard about Black-crowned Night Herons. 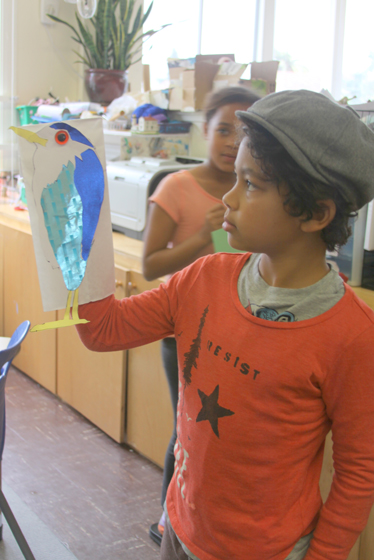 Throughout each school year, we’ve made signs, posters and stickers promoting our #OfficialBirdOakland campaign to honor #OaklandHerons. As word continued to spread, more and more people in the community began to take notice and and show their support. Our students and their campaign were featured in various news stories, including Oakland Magazine. Before we knew it, we had over 2,000 signatures of support on our combined petitions. 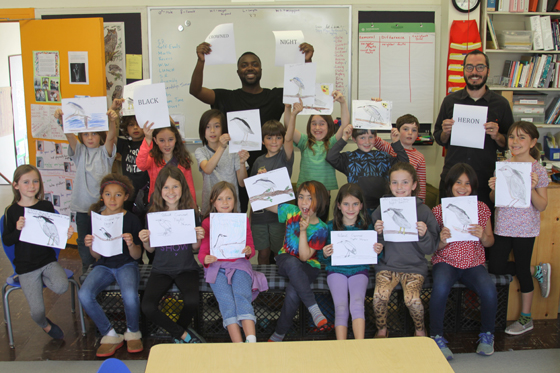 As in every good story, there were bumps along the road and unexpected twists and turns.

It seemed too good to be true when we learned about the collaboration between the downtown developers, Golden Gate Audubon and the City of Oakland to help relocate the herons back to Lake Merritt. It was exciting for our students to learn about the relocation project and the destination sites that were being optimized by wildlife ecologists. Cindy shared photos of the decoys and the nests, as well as audio of the heron calls. Will the herons respond to the bird calls and move back over to the lake and away from traffic dangers downtown? Only time will tell. We’ve been crossing our fingers ever since.

The Official Bird of Oakland campaign finally got the traction it needed in April 2019 when the proposal became an agenda item to be considered by the Legislation & Rules Committee. We took all the third graders back to city hall with their heron puppets and signs. The speakers in favor of our campaign that day included two fifth graders from the original class that launched the campaign, two current third graders, and representatives from International Bird Rescue, Golden Gate Audubon, the Oakland Zoo and EBALDC (East Bay Asian Local Development Corporation).

The item was approved and the resolution next needed sign off from the Public Works Committee. Once again, we headed back to city hall and joined our community partners with several students explaining the case for the Black-crowned Night-Heron to this committee of Oakland’s elected councilmembers. We were over the moon when it received that committee’s unanimous approval to advance to a full City Council meeting a week later. All of the pieces came together on May 14, 2019, when Oakland’s entire City Council voted in favor of the resolution to make the Black-crowned Night Heron the Official Bird of Oakland. 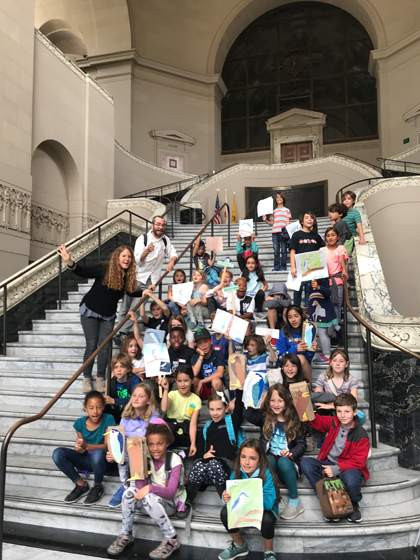 Even though our campaign took more than two years:  longer than anyone expected, we met so many wonderful people in the community along the way and we learned some valuable lessons. We learned first hand what it means to be an activist and an advocate. Being an activist means more than carrying a sign. Being an activist also means doing steady work behind the scenes: making calls, writing letters, signing petitions, creating art, organizing meetings—even when it seems like no one is paying attention. Being an advocate means speaking up for the unseen and voiceless, including our animal friends. Most of all, we learned that it takes time to make big changes and that everything is better when you can work together on a common goal. 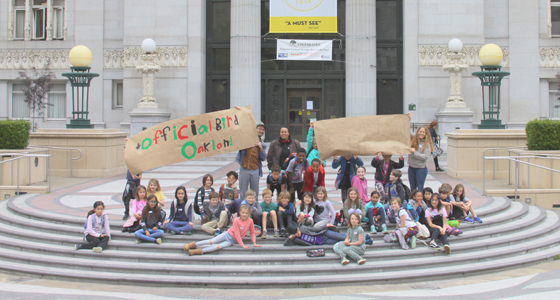 This is a true story that has a happy ending. Here’s to the Black-crowned Night Heron, the “cool and funky bird” that’s now the Official Bird of Oakland. And here’s to all of the dedicated, determined and tenacious students out there who will grow up to be the caretakers and changemakers in our community and world at large. We believe in you!

Jeanine Harmon is the Director of Community Outreach and Service Learning at Park Day School in Oakland, California.