Text and photos by Chlem

Spring 2019. San Francisco. Garden. Pear tree. The Anna’s Hummingbird is back. She first appeared in 2017, building her nest all by herself, using whatever she could find. She used spider web to tie it. Some lichen to decorate for camouflage and because it is an antiseptic. This phenomenal bird is tiny but mighty. The more I learn about hummingbirds, the more I believe this to be true. This year she built her new nest in the same tree. It is very stable, with a lot of small branches all over, making it tricky for any other bird to trespass.

She had 2 eggs, which is the norm. White, the shape and size of jelly beans. 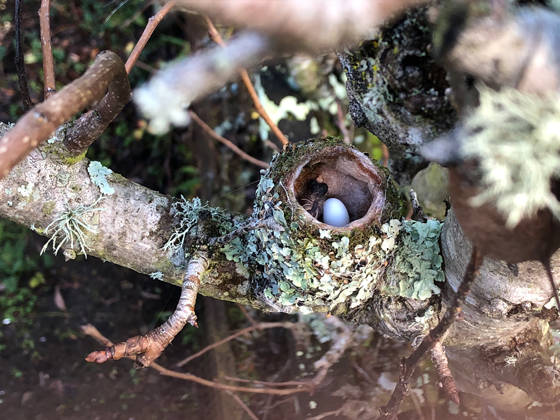 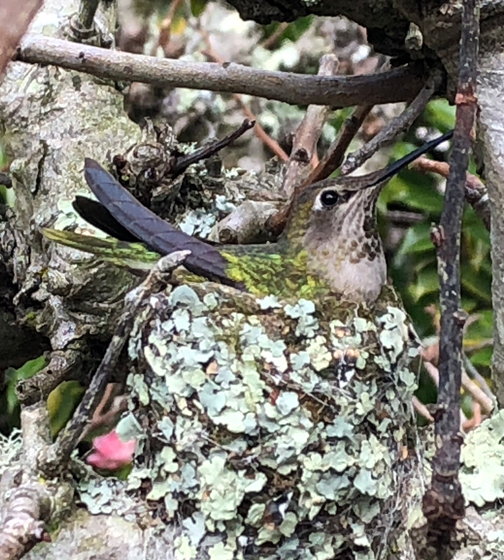 She has to leave to feed herself frequently. Hummingbirds eat every 15 minutes as they have a high metabolism, the highest among animals. She and her babies will eat a mixture of nectar and insects. The incubation is about 16 days (12-22). Two years ago, the eggs developed stains. The mother left and the nest fell to the ground. This time, all went well, and one baby, a nestling, came out. Two days later, the second one.

When she is not sitting on the nest, she flies or perches as she cannot walk or hop. She moves on the branch left and right. In the air, she goes up, down, right, left, forward, backward and upside down! Her regular speed is from 50 miles/hour to 90 miles/ hour.

She likes any plant with bright fiery hues of red, orange or yellow. She has tiny hairs on her tongue to lap nectar. She can hear better than humans but cannot smell. She sees in ultraviolet light and can see further than humans. She can visit about 1,000 to 1,500 flowers and will remember each of them and how long it will take for the flower to refill with nectar.

Hummingbirds belong to the family of the smallest birds on the planet and there are more than 325 species. Some hummingbirds migrate up to 500 miles. Anna’s Hummingbirds do not migrate and you can see them year round in the Bay Area. In extreme cold they will go into torpor. They live about 3-4 years, weigh less than a nickel and can eat their size in a day. They can stick their tongue out 13 times/second. The female is mainly green and grey with some iridescence on her throat. I can see it when she feeds the nestlings. Her heart beats at 1,260/minute. She will not mate for life and will likely take more than one mate in a season. 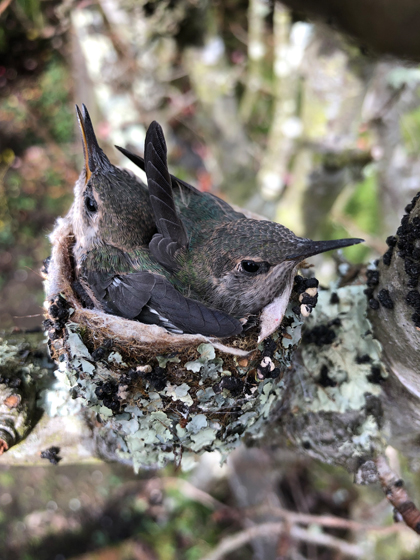 21 days after the first egg cracked, the bigger baby left the nest. She roams from the camellia to the plum to the pine trees. Now, we have 3 hummingbirds in the garden and I never know which one is which. A male might come by and court again. I am keeping the telescope out in case they decide to someday make us empty nesters again. Addicted.

Christine Lemor-Drake always felt in tune with the birds in the Paris banlieue, the country and the cities. She wrote for years as a translator, then studied botanical art with Mary L. Harden and now Sumi-e with Fumiyo Yoshikawa. This is her first one page story inspired by her California typewriter.