As you probably know, WildCare doesn’t name our Wildlife Hospital patients (not least because we admit over 3,500 of them a year!) but this fledgling Osprey arrived already came with a name. He’s known as Tam, one of three fledglings in the much-watched Golden Gate Audubon Osprey webcam nest on the Whirly Crane in Alameda. Tam grew up in his crane-top nest under the care of his parents, known as Richmond and Rosie. The Osprey pair has successfully raised numerous broods of chicks, including Tam and his siblings, dubbed Shasta and Lassen, by their fans.

Osprey chicks begin flying when they are about 60 days old. On July 5, 2020, cam-viewers watched the fledgling Tam make his precarious way up the crane to try out his wings, losing his balance but regaining it many times. Fledgling birds are a lot like teenagers; they don’t have all the control they need over their gangly limbs. Tam’s clumsy adventure was typical of young Osprey his age. The video feed captured Tam eventually tumbling to the ground, where he was rescued by one of the trained observers monitoring the nest, and was brought to WildCare. 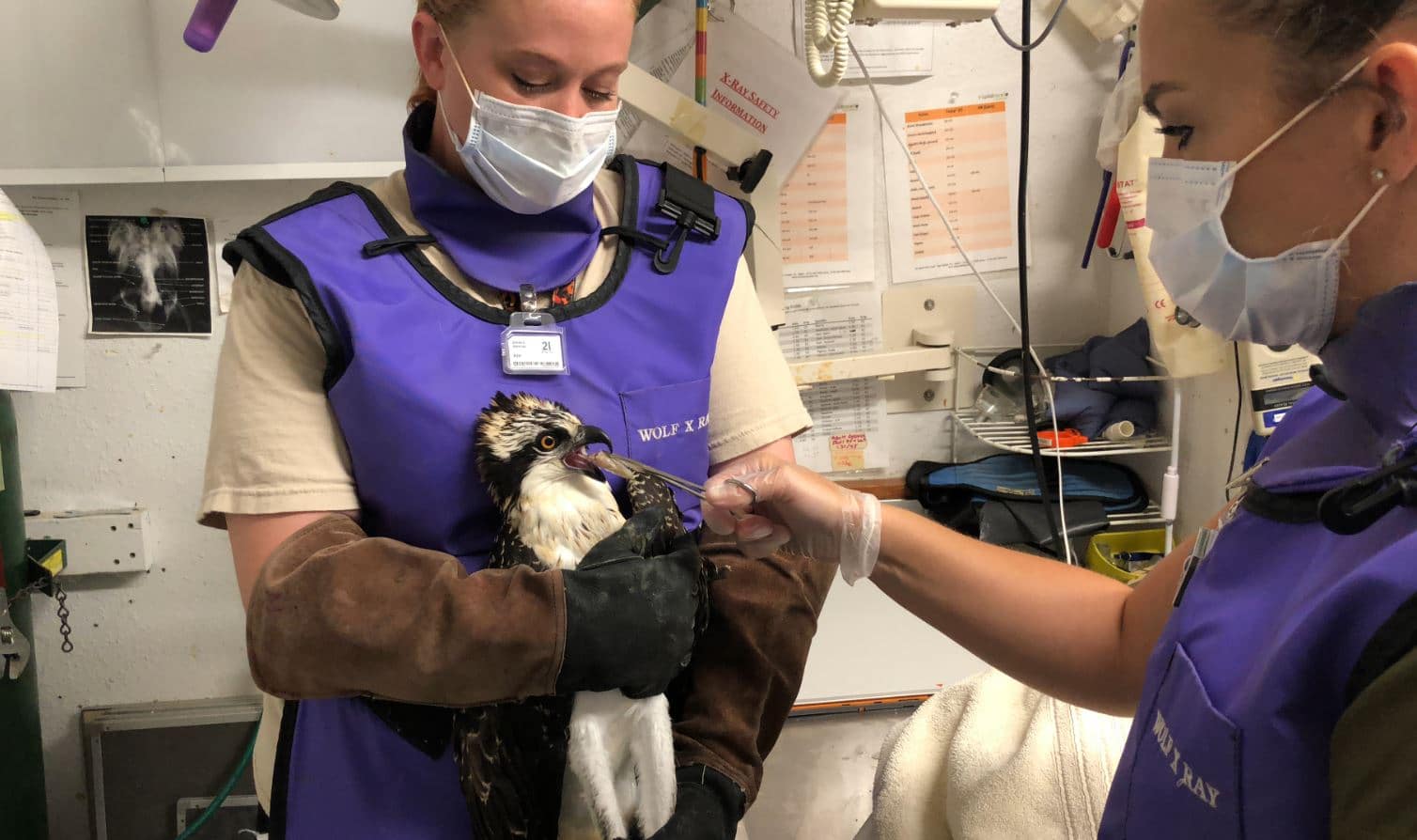 Tam had always been the smallest and least active of the three chicks. He arrived at WildCare alert but quiet, and demonstrating the symptoms of head trauma.

A full exam and x-rays found no injuries, but our team was concerned that he hadn’t been able to get himself back up onto the crane after his aborted test flight. A fully healthy fledgling Osprey should be able to hop-fly back to his nest, but Tam had not been able to do so.

However, with Tam’s head trauma symptoms resolved after several days in care, our team made the decision to give him a test flight in a large aviary. As long as the test flight went well, we planned to return him to his parents’ care that day. Osprey are incredibly difficult patients to have in captive care, so returning him to the nest would give him the best chance of success.

It turns out we were right to be concerned about Tam’s overall health.

Very unexpectedly Tam fractured his leg in the aviary that morning. It was a shock to all, as there is no discernible reason for the injury. The bird’s original x-rays gave no clue that his leg might be an area of concern, and he did not have a hard impact landing. We are just glad that Tam was still in captivity when this happened, instead of having it happen during his first dive for fish in open water, as could easily have been the case. 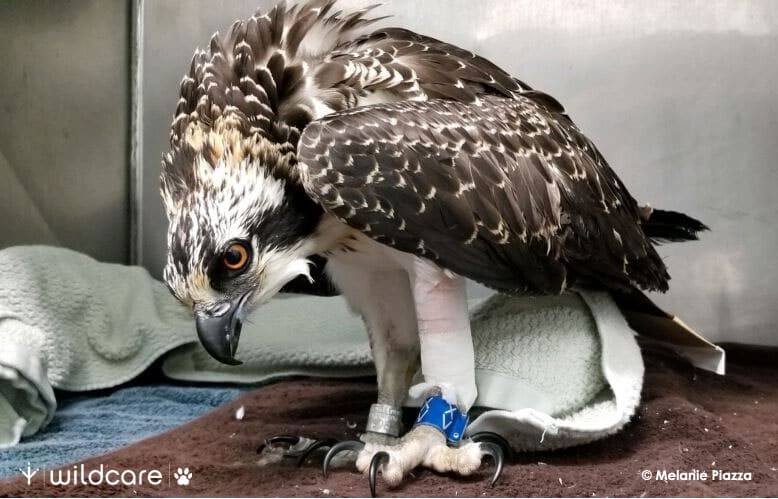 Tam was immediately started on pain medication and put under sedation so that new x-rays could be taken and the leg could be splinted. That same afternoon, our team rushed Tam to International Bird Rescue in Fairfield, where avian surgeon Rebecca Duerr, DVM, MPVM, PhD came in on her day off to do the emergency surgery with the assistance of her husband, Guthrum Pardin, DVM. Dr. Duerr successfully pinned the fracture in the bird’s leg in a surgery that took several hours.

As early as the next morning, Tam was putting weight on the pinned and splinted leg, a good sign.

If Tam is able to keep weight on the leg, the fracture could heal in as little as two weeks. During that time, WildCare staff will continue the course of antibiotics, clean the pin site daily, supplement the bird’s calcium, and assist-feed him and provide medication for pain twice a day. Once-weekly splint changes will give the team the opportunity to assess healing and callus formation.

The gallery of photos below shows the initial x-rays of the fracture, taken at WildCare, and includes some photos taken by Dr. Duerr during the surgery itself. The “hockey shin guard-style” splint you can see on the bird’s leg in the image to the left provides rotational stability for the leg. Dr. Duerr opted to use this rather than placing an external fixator because of concerns for the bird’s bone strength and also for notorious osprey temperament in care. The other x-ray images were taken during surgery and show the pin before it was cut.

As of this writing, Tam continues to put weight on the pinned leg, and the leg and foot both look good. A splint change later this week will help us see exactly how well the leg is healing.

Getting an Osprey to eat in captivity is very challenging, but earlier this week, Tam started accepting chunks of fish off tongs, and that has made keeping his weight up much easier. In the video below you can see WildCare’s veterinarian, Dr. Juliana Sorem using the tongs to assist-feed the bird.

Because he’s still young, it makes sense that Tam would be expecting food to still be provided from the beaks of his parents, even as he’s learning to tear into and eat fish on his own. Our team very much wants young Tam to start eating on his own, as assist-feeding a discontented Osprey three times a day is challenging and stressful for both bird and handlers. The bird peers with interest at chunks of fish placed at his feet, but he has not yet made the connection that he can pick those up himself and satisfy his hunger.

Of course we’ll keep feeding him from the tongs until he is fully self-feeding.

So what is Tam’s prognosis? Obviously it is still early days, and an injury like this will take time to heal.

There are still many possible setbacks that can occur during his recovery. We are very pleased that the surgery went well, but the next few weeks of rehabilitation will be a challenge. Handling a wild bird for assist feeds, medicating and splint changes takes its toll on the bird and his feathers.

As discussed above, we also don’t know the underlying reason for the fracture, or why he wasn’t able to get back up to the nest in the first place. Although the successful surgery is encouraging, Tam has a long road to recovery ahead of him.

Of course we will continue to do everything in our power to give Tam the chance to return to his life in the wild.

Alison Hermance is the Director of Communications and Marketing at WildCare. Alison has been at WildCare for 16 years. She has served as Major Gifts Officer, Volunteer Manager, Web Manager and Director of Communications and Marketing. In 2005 she took over the creation and maintenance of WildCare’s website, and continues to be responsible for all website content. You can read more of Alison’s writing here. This blog post originally appeared on the WildCare blog and WildCare’s official Facebook page.