The four chicks – two male, two female — hatched at the end of March in a nest on the 33rd floor of the downtown PG&E building. By the beginning of May, they had gained their flight feathers and were ready to take wing.

But first flights – never easy anywhere – are particularly dangerous in a downtown of concrete canyons and glass walls.

“San Francisco is an incredibly difficult place for babies to fledge,” said Mary Malec, one of about 20 volunteers who are monitoring the falcons from street level and from a donated suite in a nearby office building with a view of the nest.  “There are so many buildings to run into. Some are glass, which birds can’t see. It’s easy for them to end up on the ground, where they can run into trucks and buses and all sorts of hazards.”

Within the past week, both of the young male falcons have had close calls:

Sutro, one of the males, flew to a nearby building last Thursday. When he tried to return to the nest site, he missed and tried to land on another building. But it had a smooth façade and his talons couldn’t find a grip: He dropped off and fell, flew, tried to land again, and ended up on an architectural pillar only 15 feet above the street.

“Baby Peregrines fly well – it’s landing that they don’t know how to do yet,” Malec commented.

Sutro would have had a tough time regaining the 33rd floor  or comparable heights – where the parent falcons continue feeding the young ones — from such a low launch spot. So the fledge watch crew called Glenn Stewart, director of the Santa Cruz Predatory Bird Research Group and a kind of fairy godfather to young Bay Area raptors. At 9:30 p.m., the volunteers managed to find a ladder and Glenn climbed the pillar, trapped Sutro in a rescue box, took him to a vet for an overnight check, and returned him to the PG&E nest ledge.

The Perils of Perry

Perry, the other male eyas (young falcon), had flown successfully a couple of times last week. Then on Thursday he flew off the ledge and vanished. The fledge watch volunteers kept eyes out for him on nearby buildings, but no luck. Night set in. Everyone was focused on getting Sutro off the pillar. By Friday morning Perry was still AWOL and some of the volunteers began to fear for the worst.

Then someone posted a message on the fledge watch’s Yahoo Group, saying he’d seen a photo of a falcon on the sidewalk!

It turned out that Perry had fallen or landed on the street early Thursday evening, and passersby had called S.F. animal control, which took him to the Peninsula Humane Society.

Perry sustained a small beak injury, but was otherwise fine. Glenn Stewart fetched him and returned him to the ledge. 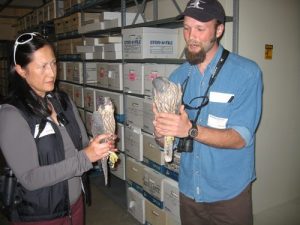 But that wasn’t the end of Perry’s perils. He tried flying again on Sunday, to a nearby roof with ridges that were good for Peregrines to grip and walk around on. Mary Malec reports that:

Perry was on the west-facing side flap-hopping and looking good, two hours after landing there.  He caught a gust of wind and landed on the north triangle.  Then another gust blew him to the smooth ridge between north and west, and he started a sideways-backwards slow uncontrolled slide off the roof.  His mom flew in and body-checked him as he was going off and bumped him upwards into the gutter.  I think he probably could have flown, even from his backwards/sideways position but it was cool to see his mom intervene so dramatically.  She realized his danger and got there in a split second and body-checked him out of danger—

What better way to celebrate Mother’s Day than with an attentive mama Peregrine rescuing her baby?

Human holidays and goofy headlines aside, this is serious business. These young falcons will get better at flying with practice and as more of their feathers grow in. But the odds are still stacked against them, with hazards that range from glass-walled skyscrapers to prey that is contaminated by rat poison.

We humans have created urban environments that can be extremely perilous for the few wild species that try to live among us.

Yet we also have individual humans putting in great time and effort – in this case, people using their vacation time to spend hours monitoring the falcon nest – to help these young wild birds survive.

It’s amazing to see the fledging process happening in the middle of our concrete downtown. It’s equally amazing to have volunteers like Mary and experts like Glenn who are determined to help.

Thank you to all the fledge watch volunteers and supporters!

Want to follow the falcons’ further fledging efforts? You can see photoes and read  a continuing stream of updates at the SF PG&E Falcon Yahoo Group. There are also video clips of the young falcons being fed and taking flight on YouTube, part of a series of videos captured from the Predatory Bird Research Group’s live webcam stream of the falcon nest.

For more about nest cams generally, see the post we did on Nest Cams last week.

Birding at the University of California Botanical Garden

Help Protect Our Birds in the Altamont Pass