Photographer Rick Lewis, a Golden Gate Audubon member, specializes in documenting the avian life near his Alameda home. Over the weekend he had a chance to watch young Double-crested Cormorants being fed by their parents in a nesting tree near a busy shopping center there. Here are two of the eagerly waiting chicks: 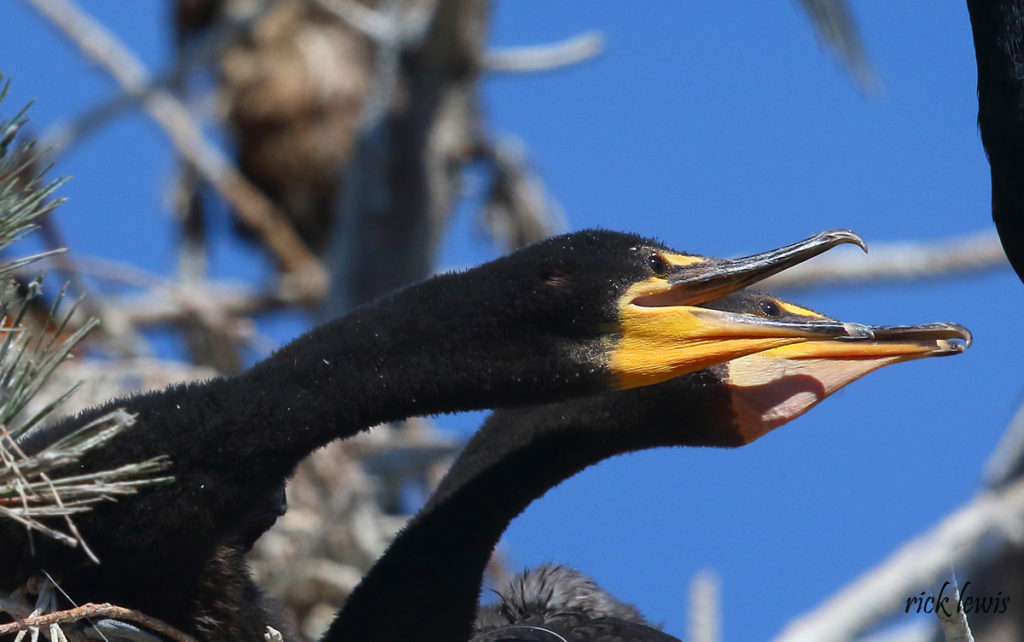 Double-crested Cormorants are the most numerous and widespread of our six North American cormorant species, and San Francisco Bay is one of their main nesting areas along the California coast. They lay an average of three or four eggs. The young don’t start flying until they’re five or six weeks old and they become fully independent around 10 weeks. In the meantime, someone needs to fetch them dinner, and it’s not DoorDash. 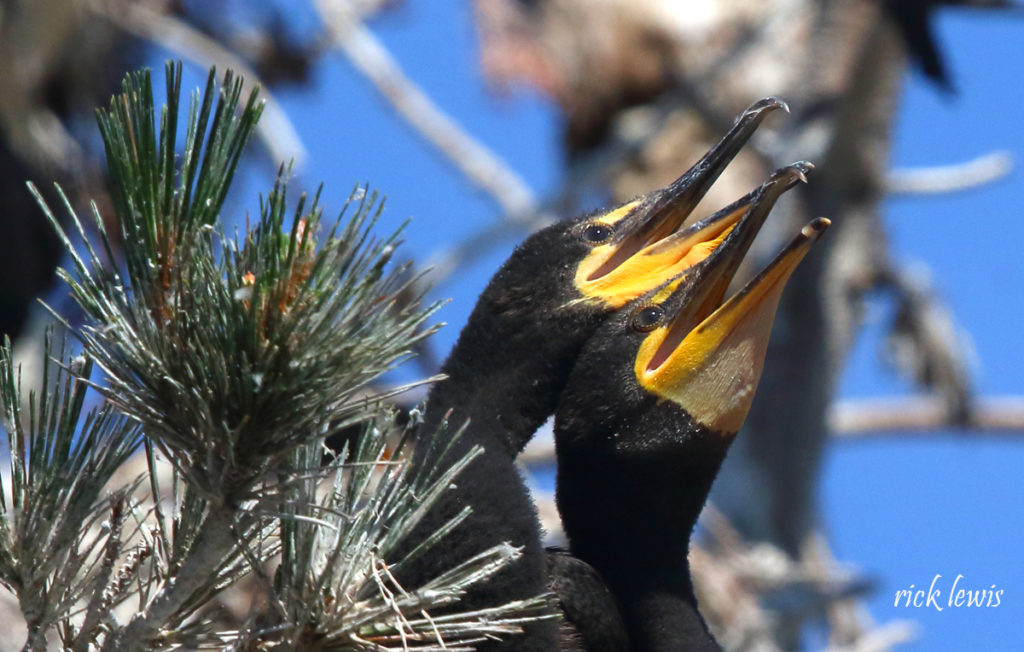 Adult male and female cormorants are indistinguishable, and they both feed the chicks through regurgitation. They catch and swallow fish until they’re full; then they return to the nest. The nestlings peck at a spot on their throat—the yellow gular pouch—which stimulates them to regurgitate the fish.

“The young Double-crested Cormorants need to coax the adult if they want food,” explained Rick Lewis. “It is only given after the proper ‘buttons’ are pushed repeatedly.  Only then will the applicant be given entrance.  It is an invasive process.” 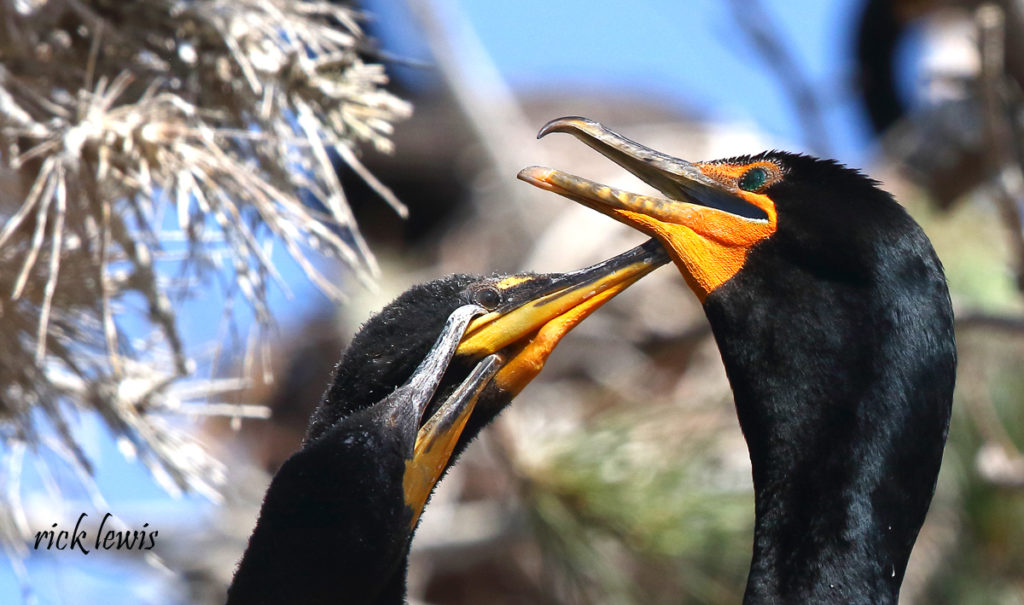 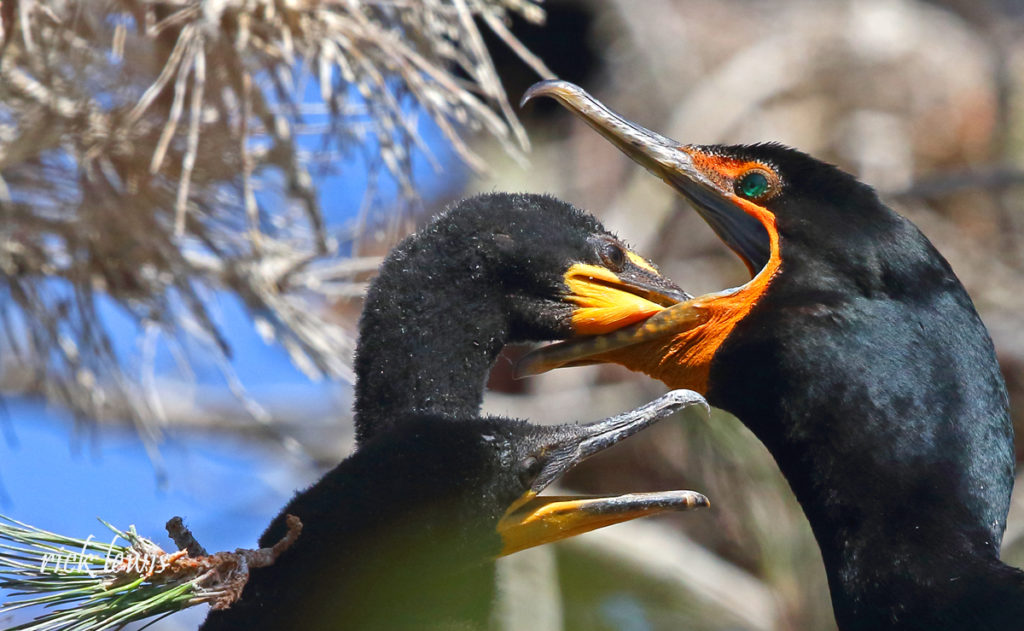 Depending on how long it’s been since the fish were swallowed, they may have been digested into a slurry liquid or they may still be whole. Sometimes older nestlings remove an entire fish from the adult’s neck pouch. 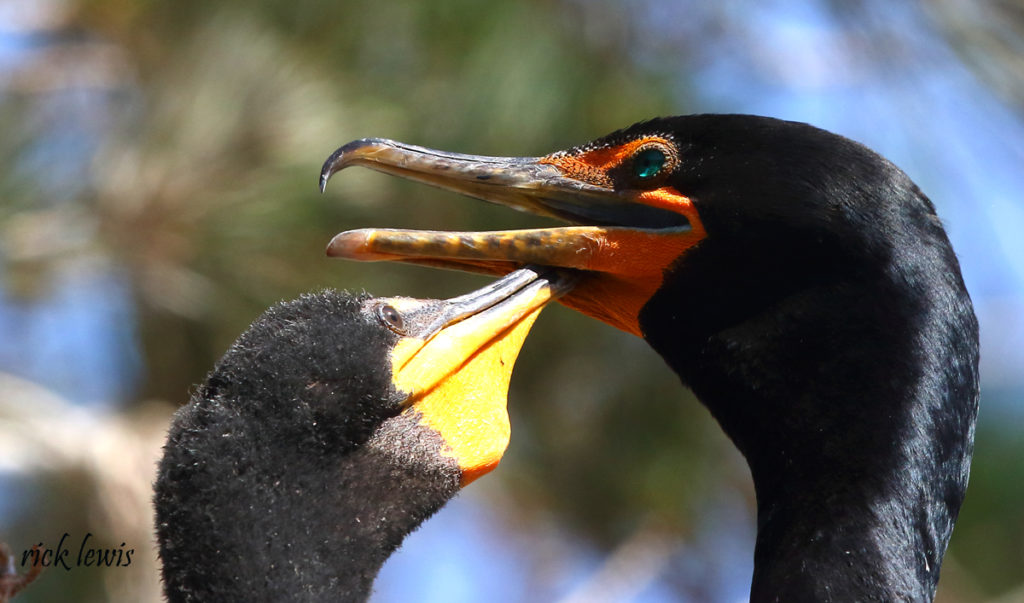 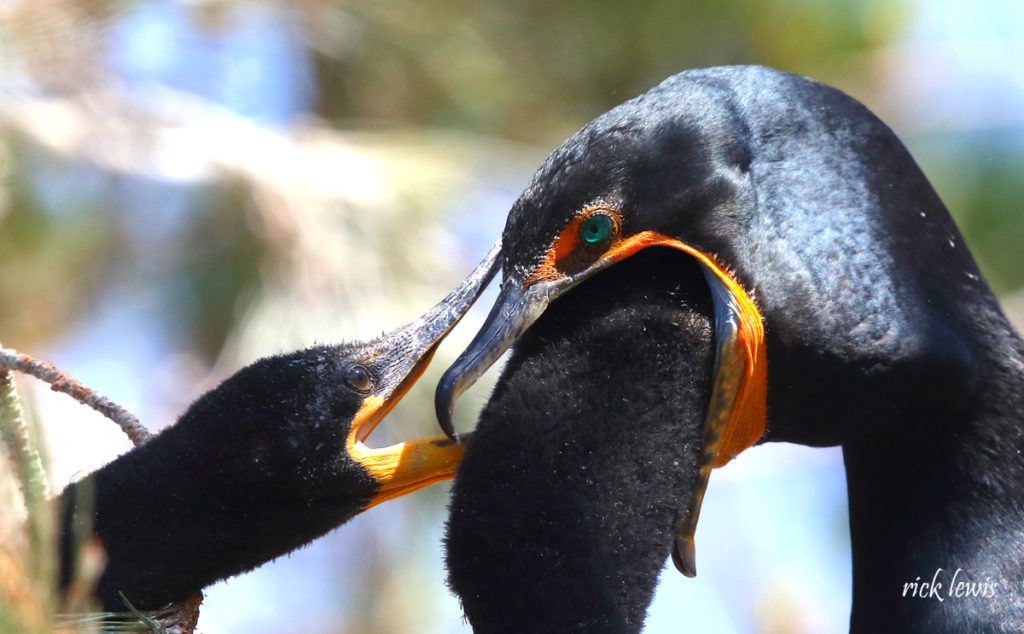 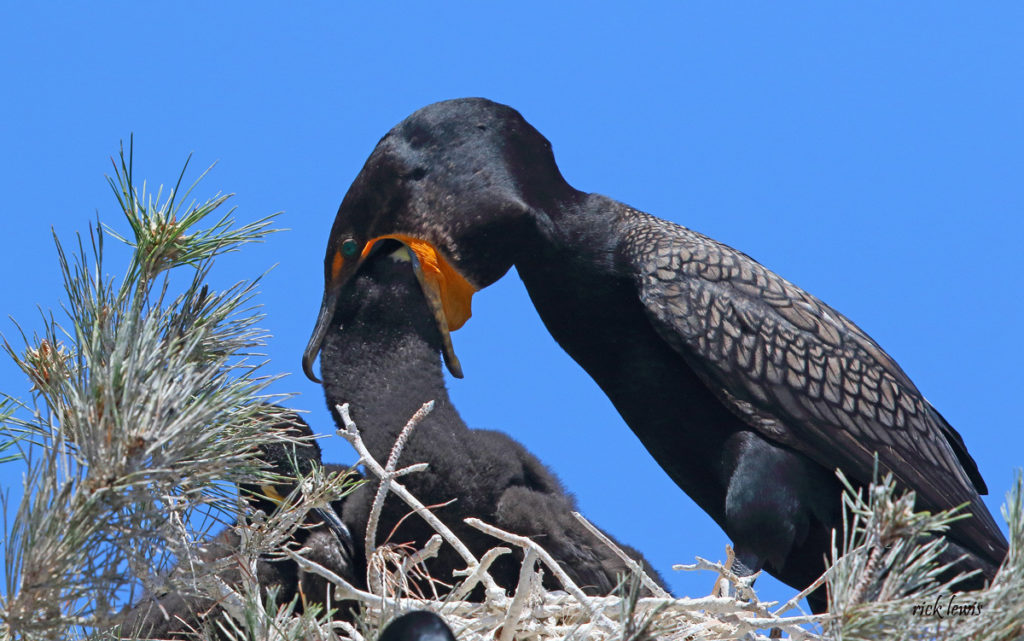 The older or more aggressive nestlings get most access to food and have the best chance of surviving to adulthood. “Sometimes the other sibling simply waits its turn, other times it pesters both birds,” Lewis said. “The adults get tired after a while and turn away or move away entirely and take a nap.” 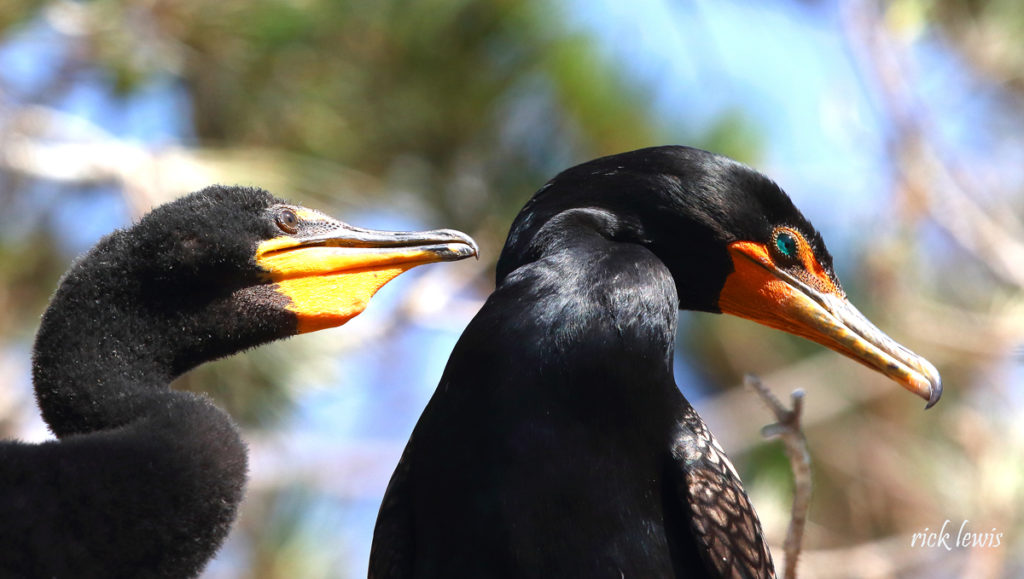 The feeding process can be messy! Ornithologists studying the diet of cormorants use the splattered remains of regurgitated meals to figure out what kinds of fish they’re eating. But bird barf isn’t just for feeding chicks. If threatened, both young and adult cormorants will regurgitate what they’ve eaten as a defense mechanism. 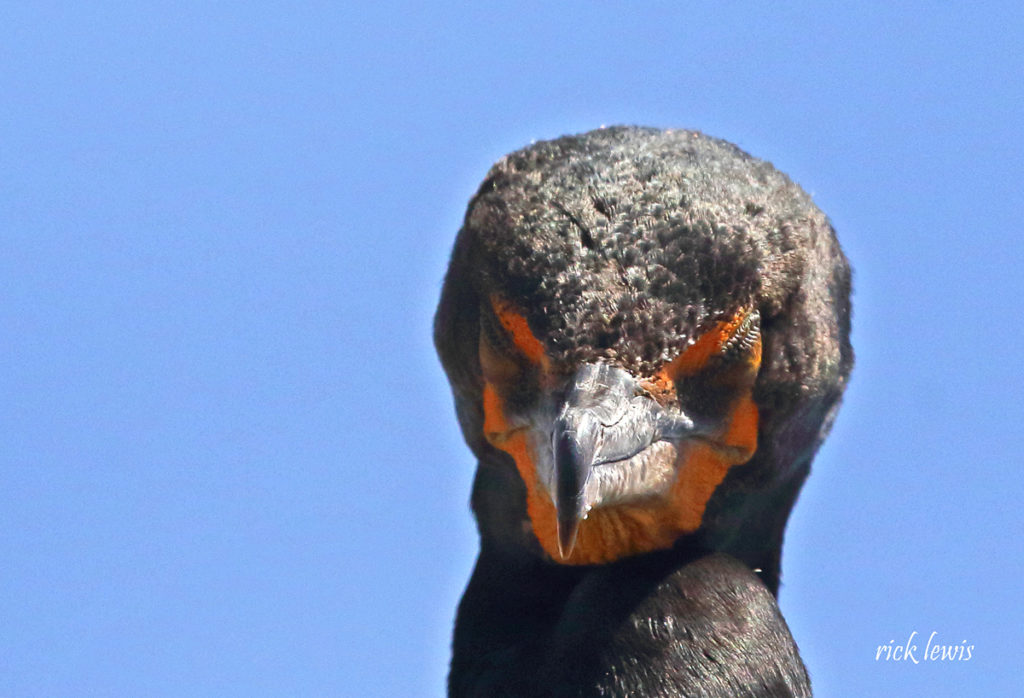 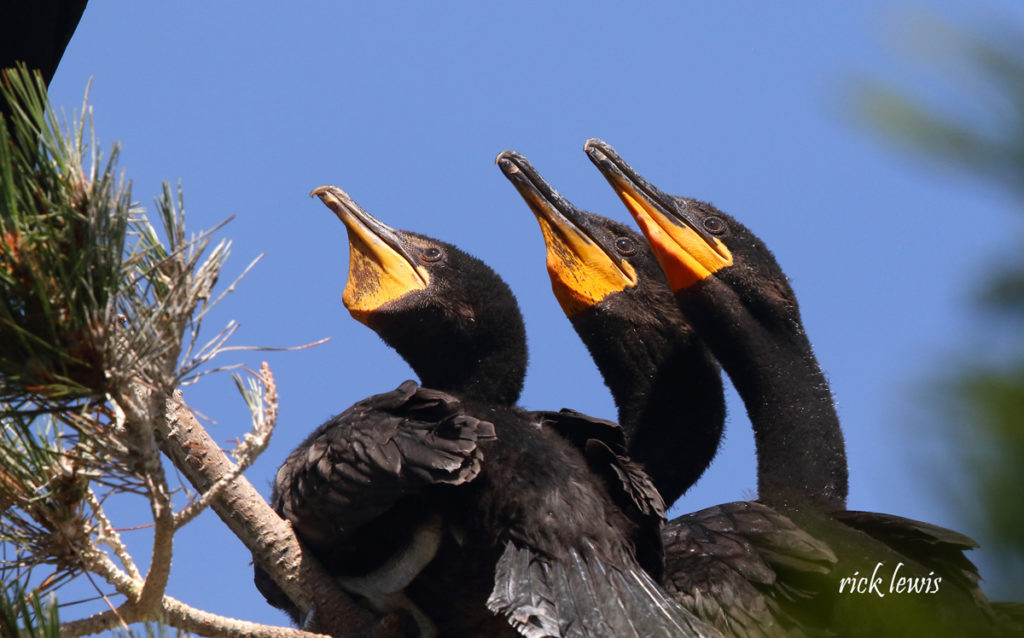 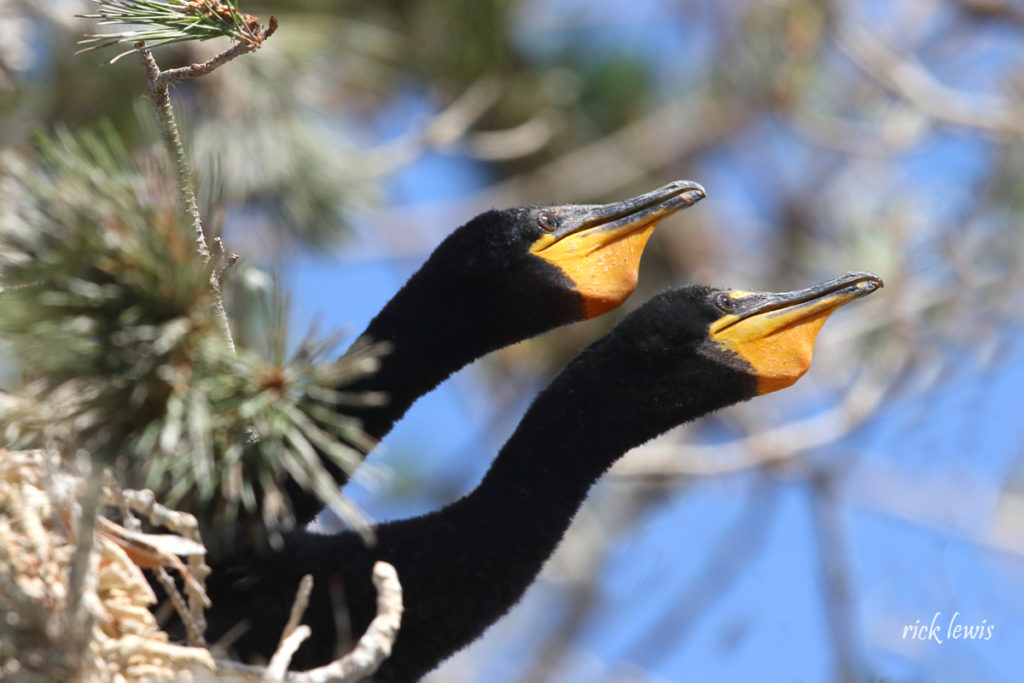 We’re fortunate to have so many Double-crested Cormorants around the Bay because of the environmental movement. The species faced a severe decline from the 1940s through the 1970s because of the pesticide DDT, which accumulated in the fish they ate and caused their eggshells to thin and break. With the banning of DDT, cormorant populations have recovered. Keep an eye out for them winging over the Bay, with the characteristic “zigzag” crook in their outstretched neck.

Learn more about Double-crested Cormorants: See All About Birds or Audubon’s Guide to North American Birds.