“Trees, trees, beautiful trees,” the high-pitched song of the Brown Creeper rings out from a nearby tree trunk. These well-camouflaged little birds creep up the trees, hunting insects in the bark. Brown Creepers don’t breed on San Francisco’s Mount Sutro but they often come around to forage in the spring and fall. I imagine they wish they could change their tune to something less enthusiastic when they come to this hill we call a mountain.

For Brown Creepers, the eucalyptus that dominates the mountain is not their cup of tea. There are far more insects and spiders on the mature old oaks in Golden Gate Park or the big redwoods sprinkled through our parks. On one of my visits to Mount Sutro, a Brown Creeper was navigating the corrugated sides of a shipping container in a parking lot, giving up on the surrounding trees for some easy pickings of spiders.

Birds adapt. Many of the traits we find beautiful about birds are also the things that make them able to fill new niches and adapt to strange new environments: flight, charisma, and intelligence. And Mount Sutro is a striking example of a new, transformed environment.

In the late 1880s Adolf Sutro developed the grassland and dune landscape of San Francisco by densely planting some of it with eucalyptus and cypress, with the intention of harvesting it for lumber. Much of it was harvested and later developed, but certain areas like Mount Sutro were left with this tightly packed foreign forest. The now-61 acres were designated an Open Space Reserve by its current owner, U.C. San Francisco, in 1976.

Despite the main forest being non-native, other native understory plants like ferns, elderberry, and poison oak thrive. And because of decades of hard work by groups like the Sutro Stewards and the Rotary Club, the summit area in particular is a paradise full of the native plant species our local birds love.

In 2018 a new chapter began for the Mount Sutro Open Space Reserve. After many years of planning, UCSF published a 20-year Vegetation Management Plan. Work began by removing the dead and dying trees in target areas of the mountain. UCSF contracted Golden Gate Audubon Society to perform a bird survey to monitor the impact of the work on bird populations, and starting in 2020, Lepidoptera (butterflies and moths) were added to the survey.

For bird monitoring, UCSF identified 13 plots throughout the Open Space Reserve, representing the different forest types in terms of vegetation health. Twice per month, a surveyor starts one hour after sunrise, visiting each of the 13 plots for a stationary period of 5-20 minutes per plot. Each bird seen or heard is documented, as is any important breeding behavior.

We hope to find out how bird life changes in response to the vegetation changes. When trees are removed, how does that impact bird populations? How much time passes after major tree work before birds return for key activities like foraging and breeding? Comparing plots against each other, and using the multiple plots to substantiate conclusions from others, do more birds return to the areas with more native trees planted?

It’s still early to draw conclusions, and 2020 was a crazy year with many impactful factors such as reduced foot traffic at the start of the pandemic, increased foot traffic later in the pandemic, weeks of dangerously high smoke levels from wildfires, and less rain. But one conclusion is already clear: Mount Sutro is a bird and butterfly oasis.

Over the course of the two years, 61 bird species have been observed. Of those, 15 species have been confirmed to be breeding (observations of adult birds carrying food or nesting material, and active nest, or dependent fledglings). Another nine species are possibly or probably breeding (documented in suitable nesting habitat, singing in suitable habitat, or carrying out courtship behavior, breeding displays, or copulation). 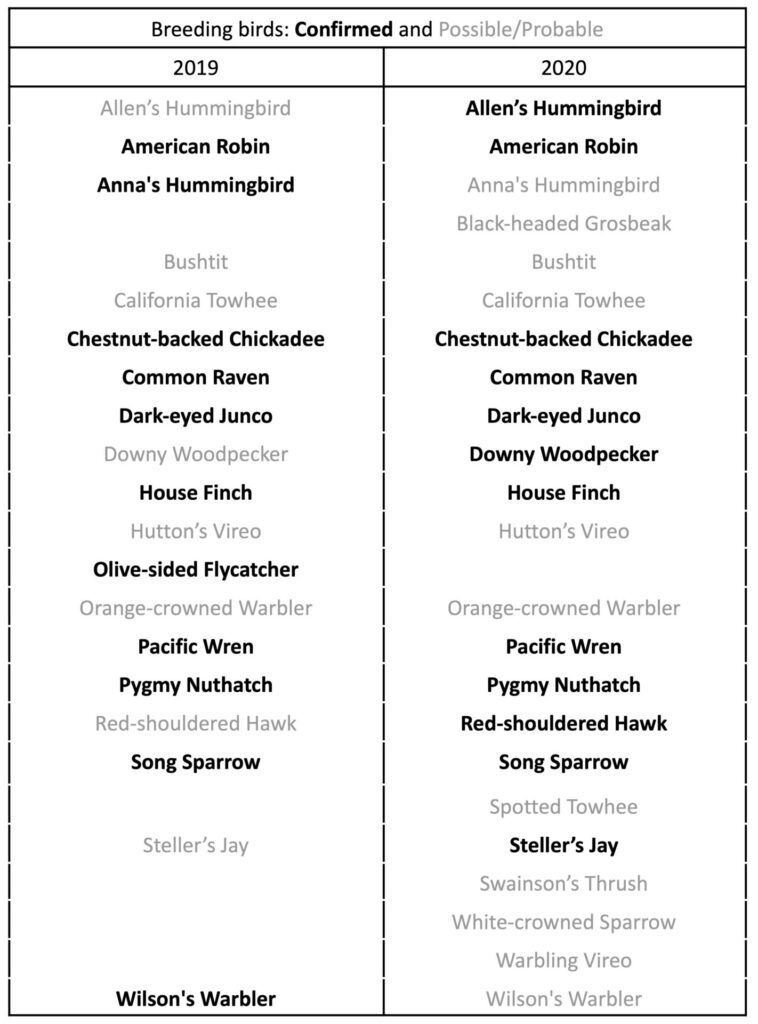 In 2020, 20 species of Lepidoptera were observed on the mountain, out of 34 species found in San Francisco more broadly. Most remarkably, a rare Pale Tiger Swallowtail was observed on the summit in May. This is the first observation of this species in San Francisco in 120 years! Most likely a vagrant, but future surveys will confirm if that is true.

We are excited to learn more as the Vegetation Management Plan progresses, and the health of the forest improves. Although some of the replanted trees will be various species of eucalyptus, others will be natives that better support our native bird and insect species. To the trees, trees, more beautiful trees!

Click here to read about the results of our first year of Mount Sutro butterfly surveys.

Whitney Grover serves on the Golden Gate Audubon Society Board of Directors and chairs its San Francisco Conservation Committee. Whitney participated in GGAS’s 2019 Master Birder class and is a founder of the S.F. Bay chapter of the Feminist Bird Club. She has led Audubon field trips at the Mount Sutro Open Space Reserve and takes part in twice-monthly bird surveys there.