Editor’s Note: We wanted to share one more trip reflection before Birdathon comes to a close. If you want to join Birdathon’s closing celebration you can register here.

Text and photos by Marjorie Powell 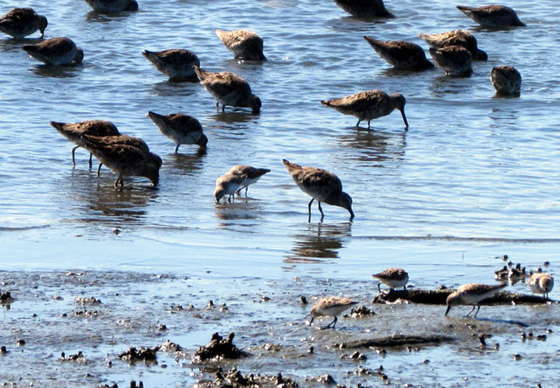 We gathered slowing at one of the two platforms at the Elsie Roemer Preserve at the edge of the Bay and later  wandered down the path to the second platform. Between the two platforms, we spent two hours looking at birds as the receding water exposed the mud of the shallow shoreline, providing more and more feeding space for those birds that poke in the mud. In that time, members of the group saw 28 different species of birds (I missed 3 of those 28), with more than 100 of some species (Western Sandpiper, Dunlin) and only a few of other species (Caspian Terns, Avocets, Anna’s Hummingbirds). Our leaders, Sharol Nelson- Embry and Joyce Mercado, helped us identify birds, described field markings, and looked up birds in their field guides to help newer birders identify differences between similar birds. Some of the Black- bellied Plovers were molting into their breeding plumage, making it easier to understand their name. The Avocets, also, showed the start of their breeding plumage – Sharol reminded us that they breed in the Bay area, unlike other birds we were seeing which migrate north to their breeding areas. 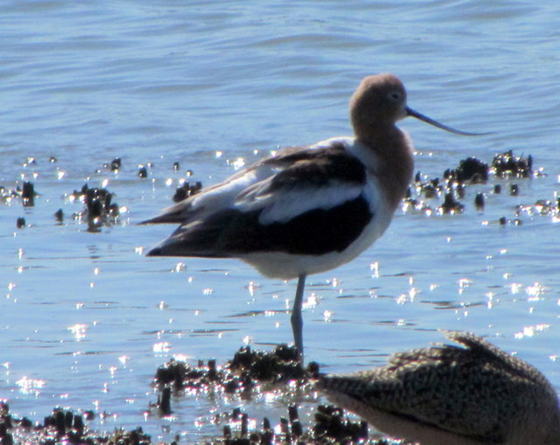 Because Sharol was entering our list into ebird, we discussed estimates of how many of the more abundant species we were seeing. Some were easy, like counting the Double-crested Cormorants on the breakwater; others were harder, like the estimate of how many Western Sandpipers we had seen at both platforms, or how many Dunlins. We all marveled at the patterns as the Sandpipers flew up and swirled over the water, back and forth, then slowly landed after the Hawk that spooked them had disappeared – they flashed dark and then light as they turned away from, and then toward, us. 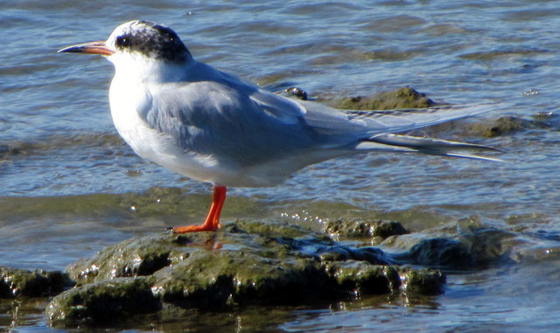 After a full morning, we walked up the block to the beach where we found a make-shift table on which we ate our lunches and shared stories of places we liked to see shorebirds. 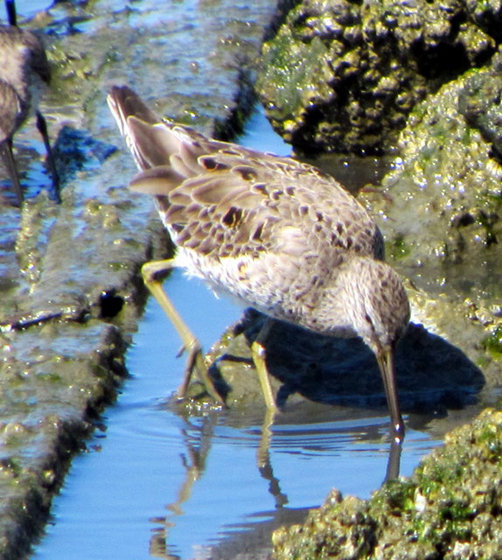 After lunch, we went inside for the promised chocolate tasting. An initial set of questions kept us occupied while people slowly settled in – when did chocolate come to San Francisco? Can you name an early San Francisco chocolate manufacturer? Who in the group has eaten chocolate in a foreign country and what country? Switzerland was the most often named, but a few South American countries were named – Ecuador for me.

Then to the pre-tasting chocolate – milk chocolate, dark chocolate, ruby chocolate, and infused chocolate. One unique item to me was chocolate tea, made from the husks of the cacao beans. That was a fun treat to start the session. Next, we moved to chairs in the kitchen, found seats, and collected water glasses and our recording sheets for the tasting. Sharol walked us though the list; company name, chocolate bar name, source country (we were tasting single source chocolates, most produced by small companies, with cacao from several countries among the 9 different bars), texture (both as bar and when you break it), aroma, taste, finish, percentage chocolate. And the first item, a milk chocolate from Hondorus with 72% cacao. We talked about each step as we went along: feel, break it, note the texture, aroma, then taste it. How long does it take to melt? How long does the taste last? 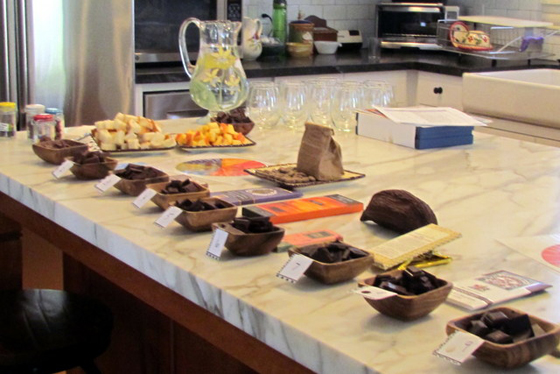 Our hosts had set out enough of each sample product for a couple more people, so we missed those people who had signed up for, but then could not attend the Birdathon event, each time Joyce passed a bowl with pieces of chocolate. 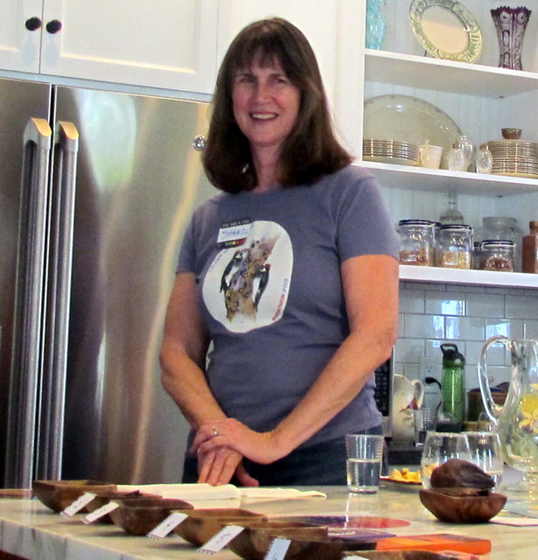 Then to taste 2, 3, and so on. Occasionally we stopped for a bite of bread or apple to clear our palates, and then back to tasting. As someone who is normally satisfied by one or two bites of good chocolate, I was overwhelmed by the 6th product and struggled to keep up, sort of, with the tasting pace. I was often still enjoying the end of one product’s taste while others had moved well into the next product, and to my senses, they got better and better. By the time I’d finished enjoying the last one, others were looking at price lists and considering what, if anything, they wanted to buy. A bag of the chocolate tea was my choice. I admit I felt wired for the rest of the day, as if I’d had too much caffeine, but it was a fun day, with the tastes lasting into the afternoon.

Oh, and chocolate came to San Francisco with the Gold Rush, as did so many other things. Early San Francisco chocolate companies include Ghirardelli and Guitard, which still make baking chocolate in the city. And everyone I talked to had eaten chocolate in at least one other country – with Switzerland being on many lists. And the first chocolate bars were made by Joseph Fry in 1847 and Cadbury in 1849. I’m considering arranging a tasting for a future family event – it’s sure to be a hit.

Marjorie retired and moved from the Chesapeake Bay to the San Francisco Bay a few years ago.  In addition to trying to learn about west coast birds through GGAS classes and field trips, she is a member of GGAS’ Friends of the Alameda Wildlife Reserve and travels frequently with her husband. She was a top first-time fundraiser Birdathon 2019

If you are interested in more information about the impact of chocolate on bird habitat check out Sharol Nelson-Embry’s website at https://www.cocoacase.com/ and this resent article about her work. http://www.alamedamagazine.com/February-2019/Sherol-Nelson-Embry-Launches-Chocolate-Business-Cocoa-Case-in-Alameda/