For my Eagle Scout project, I built twelve nest boxes for Barn Owls. These boxes (designed by Steve Simmons) are made to have draining holes at the bottom to prevent flooding, top and side hinges to make the boxes easy to open and clean, and a specially sized entrance hole to prevent Barn Owl predators from entering the box.

By installing these boxes in appropriate areas, I will help support the local Barn Owl population by providing the owls with homes safe from predators, while also controlling the rodent population. The Barn Owls will hunt and kill rats at a higher rate due to their increased numbers. The owls ensure there will be less rodents in the area, which will help the overall community, as rats are known to infest homes and buildings, causing damage to infrastructure, stealing food, and spreading diseases. 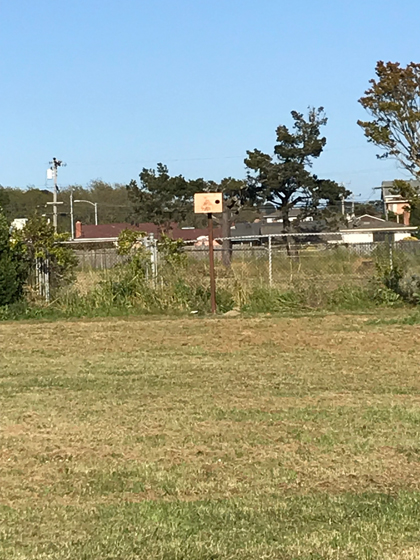 While I greatly enjoyed the project there were a few setbacks, most of which were minor if not comically trivial. I did have a very hard time finding an appropriate and approved location to install the nest boxes. The site had to have an open field for the Barn Owls to hunt in and also needed trees surrounding the area. The first site we looked at was in Point Molate, but later that site was rejected because it had hazardous conditions and a development was being planned. A site in Albany was approved but did not have a grassy field. Also, the sites needed to be away from freeway entrances and trains which could be a danger to the owls. 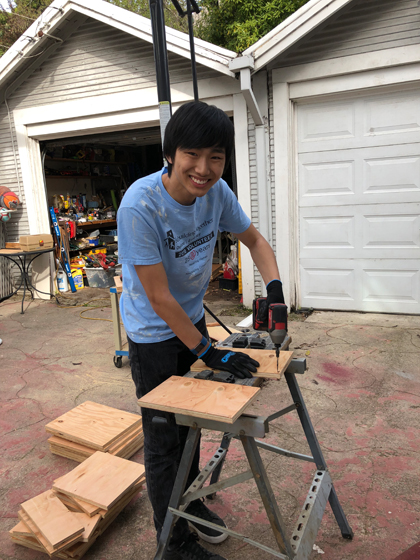 While searching for an appropriate site, I built a prototype box with Phil Chin, my troop member’s father, and continued to look for places to put the nest boxes after the Point Molate site was rejected. 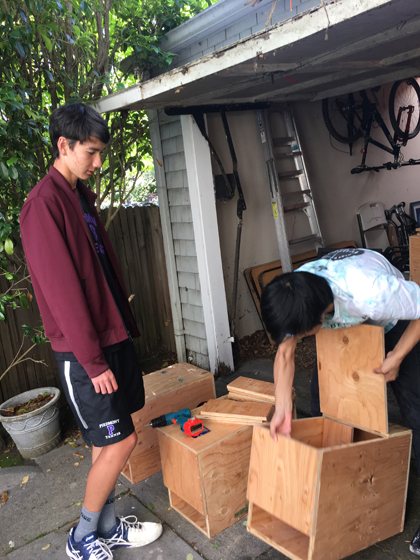 Several sites were approved, including Golden Gate Park (San Francisco), Anthony Chabot Regional Park Skyline Ranch Equestrian Center (Oakland), and JFK Park, Booker T. Anderson Park, Hilltop Green, and Hilltop Park (all in Richmond). I scouted the Richmond sites with Mark Maltagliati and Chris Womack was the contact for Golden Gate Park. I did not scout Anthony Chabot Regional Skyline Ranch Equestrian Center with Judie Martin because she had already picked out a location in a barn. 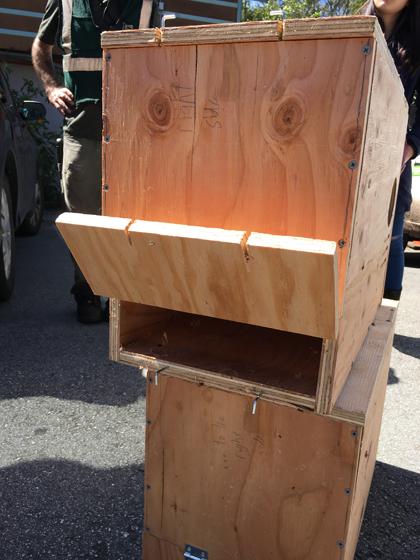 I separated the building of the boxes into two phases. The majority of the work was done with my Eagle Project Coach, Mr. Alering, who had a wood shop and tools, and 11 friends, including Nathan Rock, a fellow Eagle Scout. 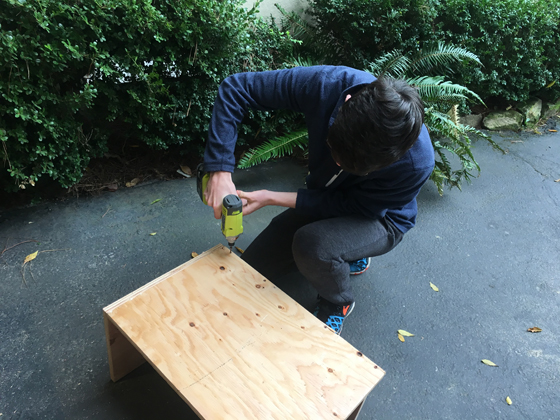 During the first phase, we cut the wood for the separate pieces for the boxes. Holes were  drilled,  the entrance hole was cut, and grooves were carved. 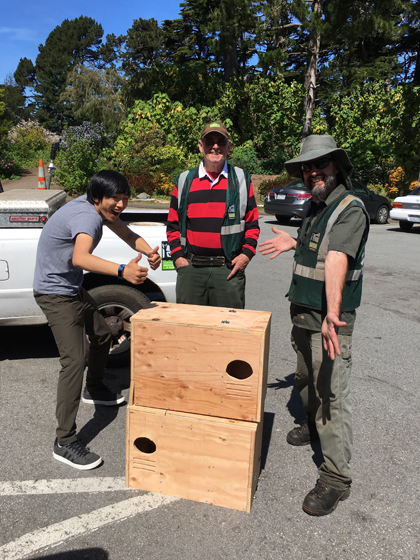 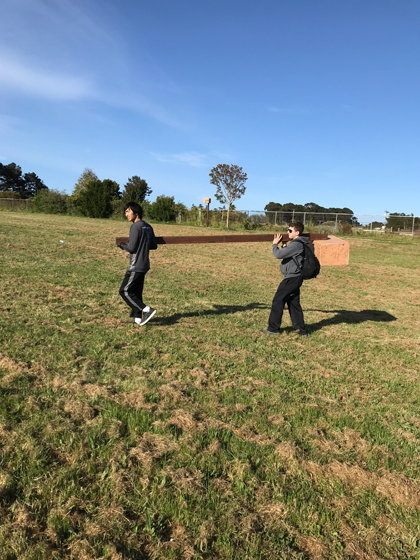 Once the boxes and poles were finished, I assembled a small team of friends to dig the holes with me and to place the poles for the mounted nest boxes (the nest boxes were mounted on site). The poles were securely installed with concrete at the base. Snacks and a break were also provided in all of these phases. 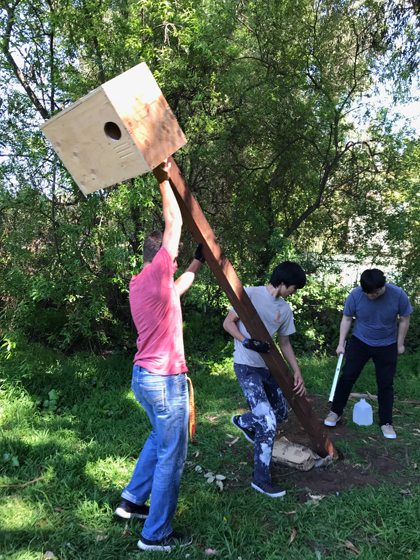 In this project, I learned new carpentry skills and all about digging holes. I had thought that digging holes was easy (like the movie Holes) but now I know how difficult this job was. If you hit a root or a rock, then you had to move to another location. Furthermore, I learned about wood and that it can split. I learned about the grain of the wood and learned to pre-drill to avoid splitting.

A total of 138 hours were spent building these boxes, boxes that will house Barn Owls, control the rodent population, and help make the Bay Area a safer, more environmentally friendly area for all critters. 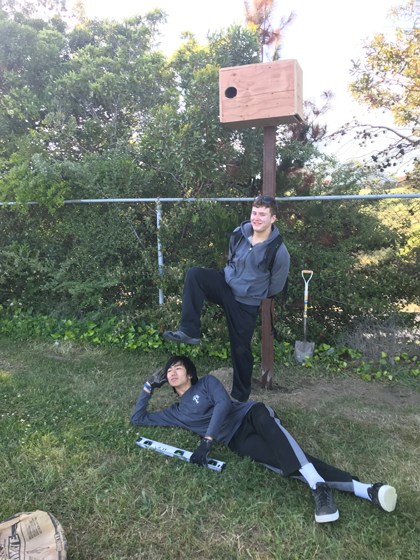 Next Winter and Spring, I plan to see if the Barn Owls are using the nest boxes in Golden Gate Park. 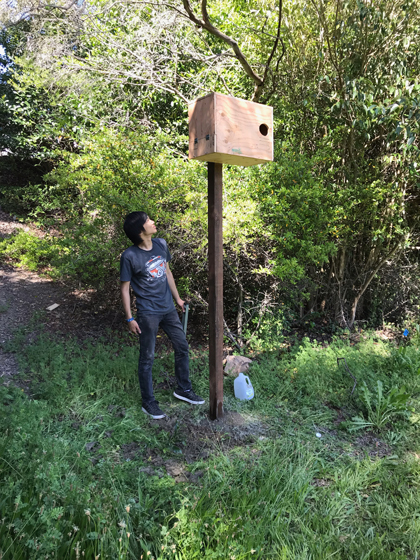 Maxwell Lee is currently a senior at Piedmont High School and an Eagle Scout of Troop 11. Outside of Scouting he fences, runs an aquarium club, and is the VP of Program for VOA in Western Region Area 3. 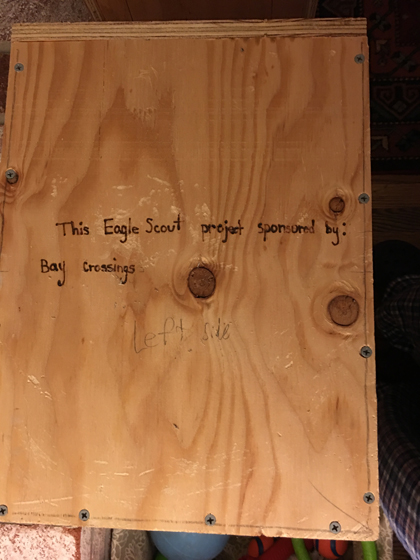