Editor’s note: If you’ve never taken the time to read a trip report, you are missing out. Please enjoy Fred’s report and this “snapshot” of a morning at the Albany mudflats. 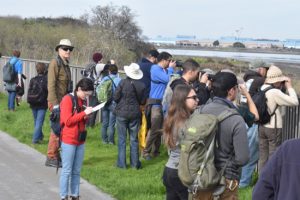 On January 26th, 40 people showed up including seasoned experts, total novices and everywhere in between.  It was a mild day for January: mostly cloudy but with no wind, the Bay was glassy. We started the day scanning the mudflats, taking in the scattered American Avocets and other assorted shorebirds, coots and ducks. Multiple Red-tailed Hawks flew by but the foraging flocks didn’t seem too concerned.

Moving on to the uplands area of the McLaughlin Eastshore State Park, we got even better views of the Canvasbacks and some of the other ducks, and really nice views of a lone Mew Gull.

The biggest highlight of the day was the Burrowing Owl standing in fairly tall grass in the middle of its protected enclosure, patiently awaiting some excitement. For us, he was it!!!

As we rounded the curve at the west end of the Burrowing Owl area, most people headed for home. But a Red-throated Loon cruising along the flooded shoreline below us, beckoned us to continue. Three people joined the optional extension out to the tip of the Albany Bulb, beginning with a chase for the perfect view of that loon. These few intrepid birders were rewarded richly for their efforts.

Jutting a half mile further out into the Bay, the rocky spit at the tip of the Bulb was a refuge sought by large flocks of shorebirds as the tides rose, including quite a few we hadn’t seen yet today:  Black-bellied and Semipalmated Plover, Least and Spotted Sandpipers, Black Turnstones, a lone Black Oystercatcher, and one Eurasian Wigeon trying to blend in with a large raft of American Wigeons. The massive schooling flocks of Western Sandpipers also put on a spectacular show out there, as did the White-tailed Kites and the Osprey.

Fred Werner lives in Berkeley where he teaches high school science and design.  A native of Washington DC, he first became interested in birds when he failed a bird calls quiz as a sophomore at the University of Michigan.  Later, he studied ornithology at Cornell University, researching fruit-eating birds and reforestation in Costa Rica.  He leads student travel and outings for all ages, including what’s become a regular monthly visit to the Albany shoreline for GGAS.  You can catch the next official Albany mudflats outing on Sat., Feb. 23 at 10 a.m.

Details and photos of more of the birds can be found on the three eBird lists submitted, one for each hotspot: