Editor’s Note: We are happy to offer GGAS members the opportunity to watch Refuge, a beautiful new film portrait of a wildlife refuge in California’s Central Valley that was recorded over the past three winters by director Mark Lipman. Mark has kindly extended free viewing for GGAS members through October 4th. This blog piece details Mark’s development of the project. Links to the film are included in Mark’s bio.

It’s been really gratifying to offer my new film, Refuge, to GGAS members during the month of September and to see that so many of you have watched it! The filming and sound recording have been a labor of love over many winters and slowly evolved into this dawn-to-dusk portrait of the Gray Lodge Wildlife Area in Gridley. 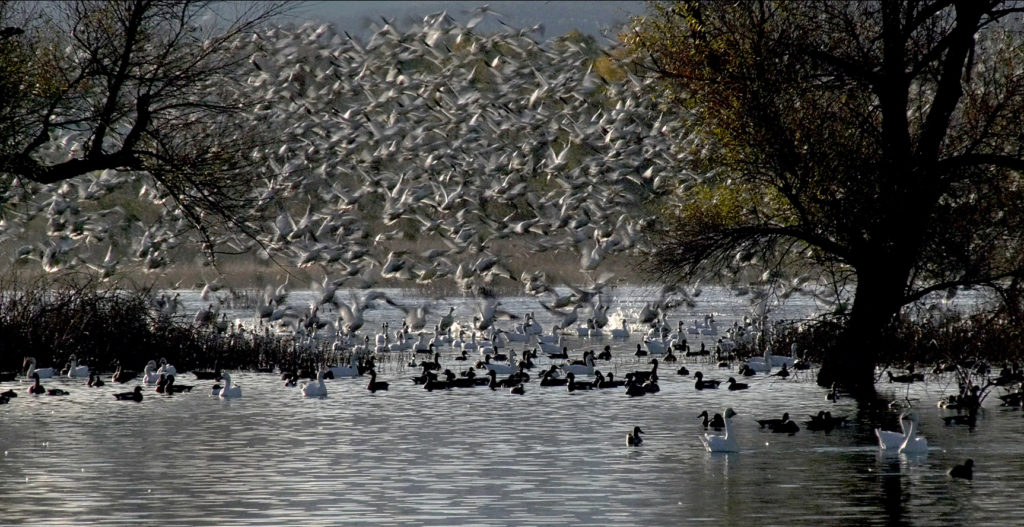 Ironically, I didn’t set out to make a film. I had been making social issue documentaries for many years when a friend introduced me to Gray Lodge in 2011. I wasn’t a birder at the time, but the beauty of the place and the symphony of bird sounds touched me very deeply. On subsequent visits I did a bit of filming and some of that early footage made its way into States of Grace, a documentary I was making with my wife, Helen Cohen, about a friend’s recovery process after narrowly surviving a head-on crash on the Golden Gate Bridge. The bird imagery became a reflective respite in the film and a metaphor for freedom and mobility.

We were consumed with the distribution of States of Grace for several years after its release in 2014 and it’s only in retrospect that that I can see the germination of Refuge during that time. In late 2015 I visited the Fort Mason Center for the Arts to see its exhibition of Janet Cardiff’s sound installation, The Forty-Part Motet. It’s a magnificent recording of a 16th-century motet in which each of the 40 singers is miked separately and each voice is played back through one of 40 speakers that are arranged in a large oval. You can stand in the center and be engulfed by the entire chorus or go up to a speaker to hear an individual who is singing. 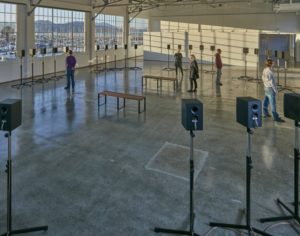 This picture doesn’t show it, but when I was there people were so moved by the piece that many had tears in their eyes and couples were holding each other closely. It was profoundly beautiful and I started to wonder what kind of a visual piece might be so evocative. Gray Lodge was the only place in my experience where I came close to having this type of experience.

Another source of inspiration – which might seem rather unlikely – came via the Snow Goose Festival in Chico.  I discovered it in 2016 and signed up for the Soundscapes of California workshop led by Dan Dugan of the Nature Sounds Society (NSS). As a filmmaker, I’ve done a lot of sound editing and field recording and supervised several mixes at Skywalker Sound, but I was blown away by the beauty of Dan’s surround sound recordings and their power to evoke a sense of place.  Over the next year I took a series of NSS workshops and learned how to make this type of recording myself. It took even longer to assemble the necessary equipment, but once all of the pieces were in place I started recording at Gray Lodge, not knowing what I would do with all the material I was collecting.

I had become interested in video installation while working on my MFA at MassArt in Boston, and Gray Lodge presented the perfect opportunity to bring together image and sound in an entirely new way for me. I decided to create a 3-channel video installation with surround sound that would take the viewer from sunrise to sunset. Refuge started its exhibition life at the Museum of Northern California Art in conjunction with the 2020 Snow Goose Festival – which was quite fitting. It was shown on three 65” television screens with surround sound and, much to my surprise, most people sat through all forty-five minutes of it.

Soon after the exhibition ended, the museum was forced to close due to Covid.  And soon after that, the museum director contacted me to ask if I could reconfigure Refuge as a single-channel film so their patrons could watch it via their website. They wanted to offer something that would be uplifting and provide a respite from the onset and impact of the pandemic. And so a film was born.

About Mark: Mark Lipman has worked as a documentary filmmaker for over thirty-five years, exploring a wide range of subjects from domestic violence to human sexuality to affordable housing and community organizing. His films have been broadcast nationally on public television and won numerous awards. Refuge is his first foray into video installations and the natural world. All photos in this piece were provided by Mark.

November at the Lagoon

Fall is the New Spring

A World Exposed Volume 2: The (humming)birds and the bees

The Secret Lives of Turkeys

Why I’m Partnering with GGAS

Home page photo of Allen’s Hummingbird by Robert Ho. Home page photos rotate on a monthly basis. If you have a Bay Area bird photo you would like us to consider, email us at mramos@goldengateaudubon.org.