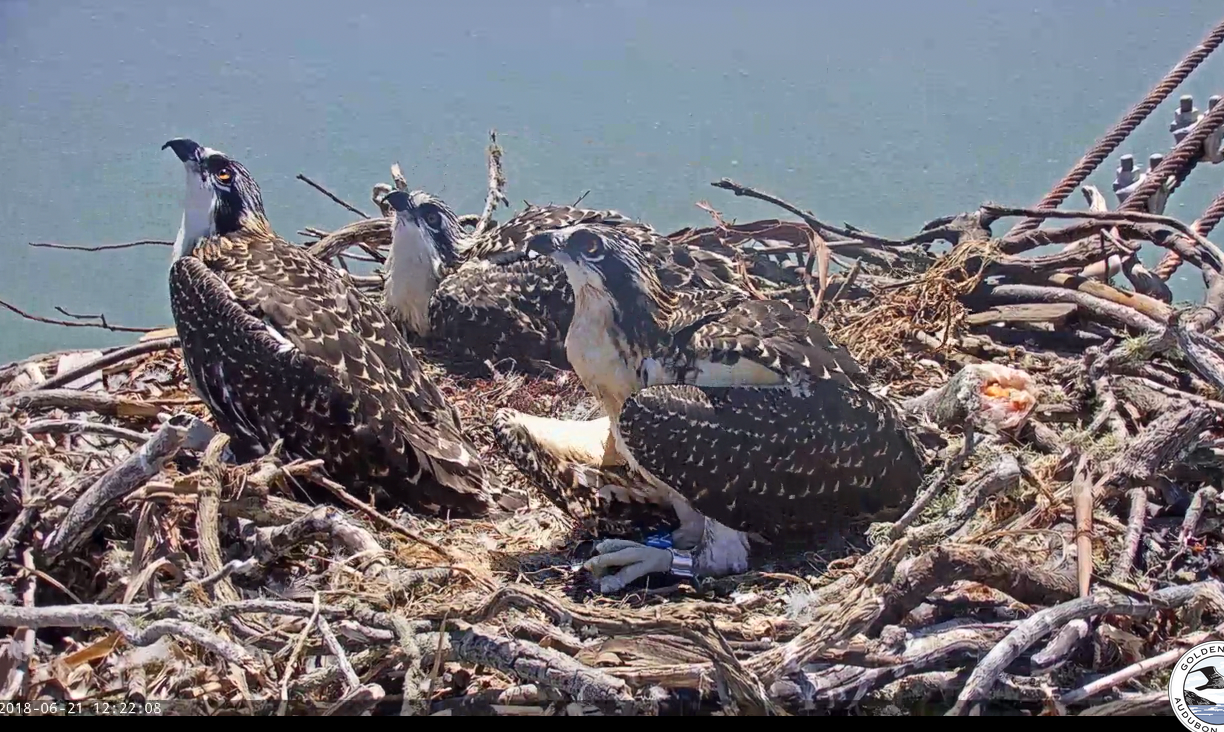 Some birds were no-shows in this year’s annual SF bird count
S.F. Examiner, January 7, 2020
Focus on extirpation of quail in the city, and importance of native plants and habitat restoration, including interviews with GGAS staff members Pam Young and Noreen Weeden.

Birds Common in Berkeley at risk from Climate Change
Berkeleyside, October 15, 2019
New report by National Audubon shows which local birds are most at risk from climate change. GGAS is quoted.

Oakland has its First Official Bird Thanks to these Dedicated Kids
Audubon News, May 24, 2019
After two years and a lot of hard work, a student-run campaign to make the Black-crowned Night-Heron the city’s mascot sees success.

Is the Salesforce Tower dangerous for birds and other wildlife?
KALW, February 12, 2019
GGAS’s Noreen Weeden’s work to protect birds from building collisions.

A Riveting Osprey Cam Has Hatched a Flourishing Human Community
Oakland Magazine, January 20, 2019
Our Osprey nest cam and the humans who love it.

Meet the Urban Osprey. It’s a Little Bit Punk and a Little Bit Geeky….and Then it Goes Hunting
Bay Nature Magazine, June 21, 2018
Tells the history of Ospreys nesting around the San Francisco Bay with mention of  “Rosie,” “Richmond.” and the GGAS Osprey Cam.

This Common Form of Plastic Pollution is a Menace to Birds
National Audubon Society, June 22, 2018.
GGAS Executive Director Cindy Margulis comments in this article about the hazards of monofilament fishing line.

Ospreys in Richmond welcome hatchlings on live cam  KTVU, May 11, 2018

Richmond’s Live-streamed Osprey Hatches First Egg of the Year
NBC Bay Area, May 9, 2018
An egg belonging to Rosie and Richmond was hatched Wednesday.

Year of the Birds Chalk Art Celebration 2018
KCRT TV’s coverage of GGAS’s chalk art event with the City of Richmond in honor of the Year of the Bird.

Richmond Mayor Tom Butt declares city’s first official bird The Richmond Standard’s coverage of GGAS’s chalk art event with the City of Richmond in honor of the Year of the Bird.

Oakland’s famous herons may be getting a new home
KALW reports on biologists trying to lure herons that have been nesting in downtown Oakland to move to Lake Merritt instead.

Not everyone is excited about the new Oakland A’s ballpark site – ABC7 News, September 19, 2017.

Flock of herons and egrets return to wetlands in Oakland – ABC7 News, July 28, 2017. Release of Oakland birds that we helped rescue.

Celebrity sea hawk fished out of SF Bay after a dive too far — East Bay Times, July 6, 2017. Rescue of one of our Osprey nest cam chicks.

For the birds – Alameda/Oakland magazines, June 2017. GGAS works with the City of Alameda to develop bird-safe building guidelines.

Osprey naming contest down to ten finalists – Richmond Standard, May 26, 2017.

Rigel Stuhmiller: From soccer sidelines to bird prints – Berkeleyside, May 12, 2017. Profile of our Birdathon 2017 guest artist.

Urban diversity – KQED Perspectives, May 11, 2017. Personal account by one of our Oakland heron monitors.

Birds being rescued after falling from trees – ABC7 News, April 18, 2017. Our second year of rescuing young herons in downtown Oakland in partnership with the Oakland Zoo and International Bird Rescue.

What is next for the McCosker Property? – Lamorinda Weekly, December 28, 2016. Mentions GGAS’s leadership role in preserving this important Orinda open space.

America’s sickest wetlands are in the West, May 31, 2016, Climate Central. Story on the challenges facing wetlands that highlights Golden Gate Audubon’s restoration work at Pier 94.

How I became a docent for Burrowing Owls – Berkeleyside, May 2, 2016.  Reprint of blog post by GGAS Burrowing Owl docent Rubi Abrams.

Baby herons and egrets rescued from dangers of city life – East Bay Times, April 30, 2016. More on our initiative to protect the Oakland herons.

Bird colony rescued in Oakland – NBC Bay Area, April 29, 2016.  Similar  to ABC7 story above, but they mis-identify everyone they interview!

Big Birds, Big City Collide in Downtown – Oakland magazine, May 2015. About GGAS’s campaign to protect the nesting herons and egrets in downtown oakland.

By the people, for the birds – Bay Nature, December 2, 2014. Comprehensive overview of GGAS’s habitat restoration work at Pier 94 in San Francisco, and how projects like this have contributed nationally to a revival of many wetland bird species. (You can download a printable version at Pier 94 in Bay Nature.)

What we can do to help our birds survive – S.F. Chronicle, September 10, 2014. Op-ed by GGAS Executive Director Cindy Margulis on how we can help Bay Area birds survive the challenges of climate change.

SF program to save birds from death by glass – S.F. Chronicle, August 21, 2014. GGAS board member Judith Pynn and Executive Director Cindy Margulis are highlighted in this story on the city planning department’s new program to monitor and prevent bird-window collisions.

Go Bears! And while you’re at it, spot a warbler – Berkeleyside, March 10, 2014. Story about the first-ever Cal versus Stanford birding competition, as part of our 2014 Birdathon.

Teen of a different feather looking for 460 birds in a year – S.F. Chronicle, January 18, 2014.. Profile of 16-year-old GGAS member Logan Kahle as he embarks on a Big Year

Breakneck Birding – Oakland magazine, Sept/Oct 2013. Feature story on a GGAS Birdathon team that set out to find 100 birds in six hours — all within Oakland city limits.

Enthusiasts set out to tally local avian population – S.F. Examiner, Dec. 27, 2012. Story on our San Francisco Christmas Bird Count. The Examiner also did an advance story on the CBC.

Alameda Navy base now a much-sought wildlife Eden — S.F. Chronicle, May 6, 2012, featuring Leora Feeney, GGAS volunteer with Friends of the Alameda Wildlife Refuge, who have monitored the California Least Tern population at Alameda and advocated for its protection for decades