If you’d like to sign up for our monthly email distribution list (which includes our Speaker Series email alerts), please email our Communications Manager, Melissa, at mramos@goldengateaudubon.org

There is no cost to sign in to our online series, however, if you would like to make a donation to Golden Gate Audubon Society, please click here.

Thank you to Recology- Our San Francisco Speaker Series Sponsor.

Wildlife and Wildfire: Animal Adaptations for a Dynamic Ecosystem

Wildfires are an important part of many ecosystems around the world. Fires provide an opportunity for new growth, to return nutrients to the soil, and to create a wholly unique type of habitat. Many species are adapted for these ever-changing systems, and they have developed a wide variety of strategies for making the best of the post-fire habitat. However, these systems exist in a delicate balance. Recently, forest fires have been increasing in size, intensity, and frequency due to human activities, and even fire-adapted species are struggling to keep up. In this talk we discuss how animals survive and thrive in a system defined by fire and what we can do to help protect the balance of these special ecosystems.

Lynn Schofield is a biologist for the Institute for Bird Populations. Her research covers a diversity of topics including bird migration, forest fire ecology, and wetland conservation. In addition to using her research to help inform effective conservation strategies, Lynn also works to help make connections with nature accessible to all. She is one of the core members of the Cal Falcons social media project, a frequent trip leader for the Bay Area chapter of the Feminist Bird Club and a long-time volunteer for the Golden Gate Raptor Observatory.

Point Blue Conservation Science’s STRAW program (Students & Teachers Restoring A Watershed) implements community-based restoration projects, engaging more than 3000 students annually in hands-on restoration across California. Since beginning in 1994, STRAW has restored more than 36 miles of streams and educated 50,000 students, all free of charge to teachers thanks to generous support from partners, funders and donors. Our speakers are integral members of STRAW and other conservation programs. For speaker bios, please click their names. 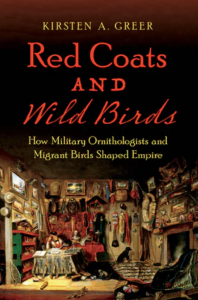 During the 19th century, Britain maintained a complex network of garrisons to manage its global empire. During their tours abroad, many British officers engaged in formal and informal scientific research. Kirsten A. Greer tracks British officers as they moved around the world, just as migratory birds traversed borders from season to season. Greer examines the writings of a number of ornithologist-officers, arguing that the transnational encounters between military men and birds shaped military strategy, ideas about race and masculinity, and conceptions of the British Empire. Collecting specimens and tracking migratory bird patterns enabled these men to map the British Empire and the world and therefore to exert imagined control over it. Through its examination of the influence of bird watching on military science and soldiers’ contributions to ornithology, Red Coats and Wild Birds remaps empire, nature, and scientific inquiry in the nineteenth-century world.

Dr. Kirsten Greer is an Associate Professor in the Departments of Geography and History at Nipissing University, and the Canada Research Chair (CRC) in Global Environmental Histories and Geographies. Her CRC program addresses specifically reparations “in place” from Northern Ontario, Canada, to the Mediterranean and the Caribbean through interdisciplinary, integrative, and engaged (community-based) scholarship in global environmental change research. She is the author of Red Coats and Wilds Birds: How Military Ornithologists and Migrant Birds Shaped Empire (University of North Carolina Press, 2020). Greer is of Scottish-Scandinavian descent, from the unceded lands of Tiohtiàke/Montréal.

Namibia is one of the least densely populated countries in the world, with 2.6 million residents.  It has the largest sand dunes in the world, and it hasn’t rained for over 10 years in parts of the Namib Desert.  But it hosts many birds and animals that have learned to survive in this arid place.  We spent some time in Cape Town with GGAS friends (Eric and Susan), and then four of us drove to Walvis Bay where we met our GGAS tour group.  We’ll show you many of the desert creatures we saw on our tour.

Bob trained as a chemist, but his second career is very avian.  He’s served on the GGAS board where he led the Adult Education Committee.  He’s an award-winning photographer and world traveler, and frequent public speaker on avian topics at libraries and Audubon Societies. He has co-taught Master Birding, Avian Evolution and Bay Area Birds for GGAS, and his bird life list stands at 5037.

The Tricolored Blackbird is a colonial breeder that is nearly endemic to California. Historically, these birds bred on wetlands in the Central Valley. As a result of the loss of 90 percent of the wetlands, Tricolors increasingly nest in agricultural fields. When nesting and farmers’ harvest schedules conflict high proportions of the Tricolor population are put at risk. Tricolored Blackbirds were listed as a threatened species under the California Endangered Species Act in April 2018 due to sharp, ongoing population declines. In this presentation Conservation Project Director, Samantha Arthur, will discuss Audubon California’s multi-pronged approach to save the Tricolored Blackbird. This approach includes creating new wetland habitat, working with dairy farmers to delay harvest until after chicks have fledged from nests, and advocating for protections under the state and federal Endangered Species Acts.

Samantha Arthur is a Conservation Project Director for Audubon California, focusing on improving wetlands management for the benefit of bird species in the Central Valley. She also manages Audubon California’s campaign to save the Tricolored Blackbird.

Since 1997 Golden Gate Audubon has partnered with the Port of San Francisco to enhance shoreline wildlife habitat at Pier 94, located along the south eastern bay shoreline, on property owned and operated by the Port of San Francisco.  After completing successful wetland and beach enhancement projects, in 2013 Golden Gate Audubon initiated habitat enhancements in the adjacent upland areas of Pier 94.  Through creative partnerships and modest funding, Golden Gate Audubon mobilized materials, equipment, and people to transform a mostly barren area of shoreline rubble and road into a viable place for native plants and wildlife.  This project is a model for beneficial sediment reuse – using clean local “waste” sediment from mining, dredging, and excavation projects for habitat enhancement rather than disposal